When opening wine, reaching for a corkscrew is second nature to most of us, but give a thought to our pre 18th century forebears who had no such bottle openers.
It wasn’t until 1795 that the Rev Samuel Henshall first patented the first direct pull corkscrew. This one action led seven years later to the first mechanical corkscrew to be patented by George Thomason.  This one patent subsequently opened the flood gates for inventive designs and patents by names such as Heeley, Lund, King’s Patent, Twigg, Farrow & Jackson and Cotterill.  Single lever, double lever, rack and pinion, zig-zag, rabbit, spring coil and twin column corkscrews were adopted by the wine drinking public. During the 20th century another development happened in the form of advertising corkscrews as wine drinking became more common amongst the masses and everyone had a double lever corkscrew in their kitchen drawer. Now in the 21st century, despite many wineries adopting screw caps, corkscrews seem even more popular. Many people now collect antique corkscrews or vintage corkscrews, fascinated not only by their often slightly Heath Robinson construction but by the fact that they can actually use an antique corkscrew in their everyday life. So next time you’re buying a gift for a wine drinking friend why buy the ubiquitous Alessi Anna G double lever corkscrew or a mass-produced Waiter’s Friend when you can opt for a 200 year old Thomason Patent Corkscrew with bone handle and solid bronze body.  After all, why would you even ask the question “How do I open a bottle of wine without a corkscrew?” when every gentleman should have a silver cased travelling corkscrew at all times. 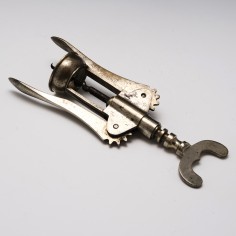 Probably Italian in origin, this heavy weight nickel plated example of the now ubiquitous double lever design has age related wear to it's surfaces and works very well. The worm is 6cm long.