Chelsea porcelain was produced from the mid 1740’s at a porcelain factory on Lawrence Street under the auspices of Charles Gouyn and Nicholas Sprimont. The two Frenchmen, a jeweller and a silversmith respectively, undertook the creation of pieces from soft-paste porcelain using technology that had been known in the United Kingdom for barely a couple of years when they set up their business, and so-called because it was fired at a lower temperatures than those required to finish hard-paste porcelain.

As ever, the initial premise for its development had been to replicate sought-after oriental wares, and it had first been crafted in rudimentary fashion at Rouen (France) in the 1670’s, and then more successfully at St Cloud to the west of Paris. Being known as “Porcelain Française” it would certainly have been familiar to both gentlemen by the time they relocated to this side of the Channel, and having been demonstrated to the Royal Society in 1742, it would have been seen as both a practical and very desirable material with which to work.

The output of St Cloud influenced the style of early Chelsea wares (those marked with the distinctive triangular stamp which denote products from the first half dozen years of production). Sprimont also took inspiration from the work of a former cohort and fellow silversmith, Juste-Aurele Meissonier. It’s likely that Gouyn set up another facility near to the Lawrence Street premises, producing early figurines for a short time until he decamped once more to his own entirely separate concern based at St James’s nearer to Westminster. Although his products were distinctive – for the most part featuring taper holders, scent bottles, small figurines and miniature animals, all of which were unmarked – once Girl-in-a-swing and know known as St James factory.

Back at St Lawrence street, Sprimont secured the future of his now solely-run operation by arranging patronage from the Duke of Cumberland. He set out to further his range of products by bringing in renowned enamellers from Ireland and France, and added to the scope of figurine production by using them as set-pieces within sets of tableware made to similar designs. The many and varied exhibits at Hans Sloane’s renowned Apothecaries Gardens were sufficiently proximate to the Chelsea works to provide a “reference library” for Sprimont’s artists, and they inspired a range of materials bearing botanically correct floral designs, after a German style which was popular at the time.

So integral to the running of the factory was Sprimont that when he fell ill in 1756 the whole thing was closed down for the two year duration of his incapacitation. Europe was by now ravaged by war the Duke of Cumberland’s interests were elsewhere, and by the time production started up again, Sèvres was setting the standards following the lead of Meissen porcelain. A newly conservative Sprimont was happy to replicate the style of the French manufactory, and ongoing commissions from the Royal family indicated that he was still very highly regarded. The following years saw many pieces produced which echoed the work of Sèvres and Vincennes, mazarine blue and exotic birds were direct influences and there was even scope for the manufacture of many miniature pieces, much like those which Gouyn had made as his earlier “breakaway” factory.

Ultimately another bout of ill-health forced Sprimont to sell the factory to James Cox in 1769. Cox very quickly passed on the controlling interest to William Duesbury, a one-time London based enameller who had set up his own pottery at Cockpit Hill in Derby. Duesbury recognised the high quality of the Chelsea material, and maintained both factories running in parallel for some fifteen years, with very similar pieces being made at both locations. So uniform was the output produced during this period that, regardless of where they might have come from, all the items became known as examples Chelsea-Derby ware. Eventually, however, this early exercise in remote business locations was abandoned, Lawrence Street was closed down and everything which could be put to good use was relocated to the midlands, along with many of the workmen.

Chelsea porcelain production is divided into two periods. The early triangle period was followed by a series if coloured chelsea anchor marks. The triangle and raised anchor pieces together with Hans Sloane botanical patterns are amongst the most widely appreciated of all 18th century English porcelain.

The gold anchor set withing the letter D is "Chelsea-Derby" and will appear in the Derby porcelain section. 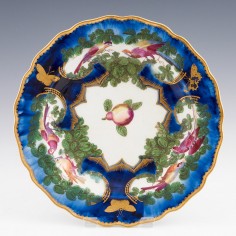 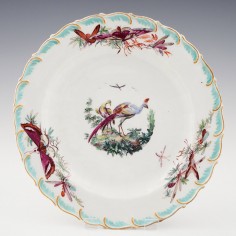 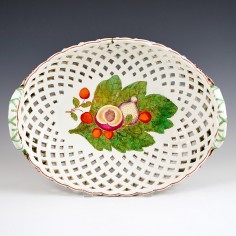 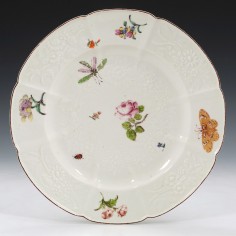 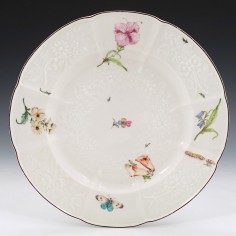 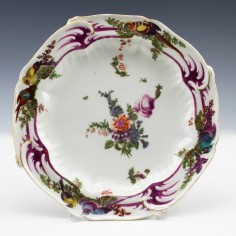 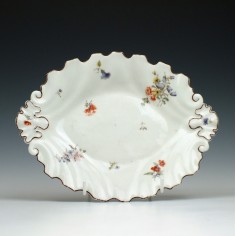