The Liverpool porcelain industry grew out of the long-standing earthenware and delftware potteries which had existed in the city since the mid 17th century. Craftsmen who learned their trade at the delft banks developed their own production facilities, and turned production to porcelain from around 1750.


The foremost name in the early Liverpool porcelain business was Richard Chaffers; firstly apprenticed to the delftware pioneer, Samuel Shaw, he set up shop in the city’s renowned ceramics-making quarter in 1752. Having started with delftware, Chaffers became obsessively devoted to replicating the much finer china material produced by his contemporary, Josiah Wedgewood. He looked far and wide for a source of china clay which he could use and he chanced upon a supply in Cornwall.

In league with one of Wedgewood’s former colleague, Robert Podmore, and further home-grown talent Philip Christian, Chaffers produced creamware that Wedgewood himself admitted was at least the equal of his own wares. Chaffers traded a significant amount of his wares to North America, making full use of the burgeoning trade routes across the Atlantic from Liverpool’s growing sea port – so much so that, in the colonies, folk in a bad temper were often said to be “as hot as Dick’s (Richard’s) Pepper Box” referring to pounce-pots bearing his name which were shipped in such bulk as to become commonplace. Chaffers and his business were going from strength to strength, but he was somewhat cruelly cut down in 1765; Podmore was taken seriously ill, called Chaffers to his bedside for one last audience, and evidently transmitted whatever fatal ailment afflicted him, as both men promptly died!


These untimely expirations left the way clear for any number of aspirant potters to step in to the breach. William Reid and his Liverpool China manufactory had been trading on a small scale since 1753, but had tended to deal mostly in earthenware without making the transition to the use of the whiter china clay substrates. Reid stepped up the volume of production at his bank, but did not actively pursue the manufacture of china to any great extent.


The three Pennington brothers, Seth, James and John all experimented in the trade with varying degrees of success. James turned out common earthenware for a time, then gave up on an abortive attempt to produce porcelain and went to work for Worcester; John followed a similar path, soliciting outside investment to continue his experimentation, but he also quit in spite of throwing not inconsiderable funds at his project, his material – though far better than it had been – still fell short of what was being produced in Staffordshire and elsewhere.

Seth was the youngest of the three, ran the largest factory, and had by far the better fortunes. He first produced outstandingly high-quality earthenware, developing an excellent bright white slip and vitrious glaze, and employing some particularly fine artists who were able to make the most of his wares. He was however, undone by his brother James – an inveterate drunkard who divulged Seth’s production secrets to competitors in Staffordshire during a particularly garrulous session. Thusly undermined, Seth turned to porcelain production in an attempt to re-establish a degree of pre-eminence, and in doing so, was able to produce some remarkably good examples, superbly decorated by his incumbent studio of painters.

Richard Chaffers’ one-time colleague Philip Christian took over his partners premises after his death, and was able to continue the production of octagonal dining plates and large punch bowls which had been manufactory’s signature pieces. He diversified to produce full dining sets, coffee services, vases and ornamental pieces, but was unable to maintain the degree of separation from the material produced by other sources in the city, which had formerly elevated the outturn of the factory above all others

Numerous other capable ceramacists all helped to enrich and entrench the city’s reputation as the site of a very highly regarded industry, Thomas Deare, Messrs Rigg & Peacock – who took over Okell’s Flint Pot Works on the former owner’s death – Samuel Gilbody and Thomas Wolfe, to name but a few.

Ultimately, this enduring level of fictile prominence lead to investors establishing the city’s largest ceramics factory the Herculaneum works on the Mersey shore near Toxteth Park. Established in 1793, it produced earthenware under the direction of Richard Abbey and John Graham. This was transfer-printed ware – another notable Liverpudlian innovation – much of which was traded to North America. So profitable was this export business that the premises were significantly expanded, and a great many workers were recruited from established factories in the Staffordshire potteries; it is noted by contemporary commentators that the “peculiar dialect of language as spoken (in this enclave) is almost unintelligible” – fine words indeed from Liverpudlians ! The company traded successfully for some five decades, during which time it took on the distinctive Liver-bird as its own distinguishing mark, perhaps denoting the high-water mark of the city’s ceramic trade, and establishing it as a brand of renown across the United Kingdom and North America. 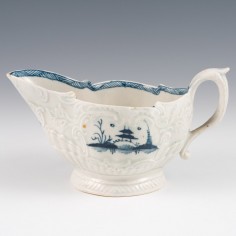 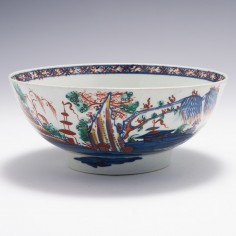 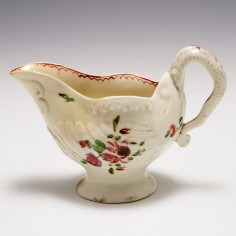 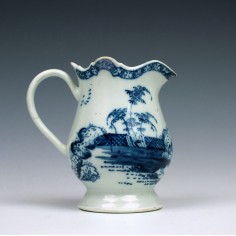 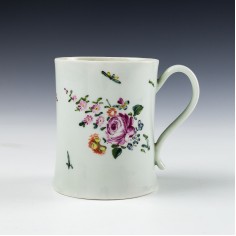