Neither one of these two locations in South Wales may immediately leap to the forefront of your thoughts when musing on the most significant British porcelain manufactories of the 18th and 19th centuries, but they most certainly had a role to play which must not be underestimated, and have left a legacy of strikingly beautiful and highly collectible items.

Good quality clay was a readily available resource around Bridgend – situated midway between Glamorgan’s two most populous towns, Swansea and Cardiff – and this encouraged local farmers set up a pottery at Ewenny around 1610, initially to produce wares almost exclusively for disposal across the domestic market in their immediate vicinity. Production of similarly basic earthenware products had migrated to the Swansea area by 1750, but still to little purposeful end other than to furnish the local community with utilitarian pieces. It was not until 1764 that things began to come together with regard to the manufacture of anything with more aesthetic and artistic appeal.

A Mr William Coles of Cadoxton was to acquire an old copper working facility on the banks of the River Taff (close to the current railway station), and undertook the conversion of this factory in to a dedicated pottery. The earliest surviving example of Coles’ work is a coarse creamware flask with incised underglaze blue decoration, which resides in Swansea museum (see picture below – and also a 1775 tea caddy of the same provenance). Coles died in 1778 and his three sons, of whom John was the most active protagonist, took over the running of the business. It was to remain an exclusively family-run affair for almost a decade, until a Mr George Haynes joined the management team alongside the brothers, initially in a somewhat philanthropic role before assuming a more properly directorial position in 1790.

His first move once installed as titular head of the firm was to assign it the name of The Cambrian Pottery, in an effort – one might easily imagine - to cast off the parochial air of a business that had thus far barely sent any products further afield than the outskirts of the albeit ever-growing town in which it was situated. A man of astute business acumen, Haynes resolved that the factory should adopt the best practises of none other than Josiah Wedgewood at his signature Etruria works as its blueprint for betterment. Thus the scene was set for the Cambrian Pottery to gradually improve its wares, and it went on to produce fine white earthenware pieces, opaque china and ultimately “a very passable kind of biscuit ware – hard, compact and of beautiful body” which, by 1796, was regarded as sufficiently similar to “genuine” porcelain as to make no discernible difference.

By around 1804, Haynes – although remaining as works manager - had devolved controlling ownership of The Cambrian Pottery to a Mr William Dillwyn, who was to then transfer the titles for the entire factory and all its moulds, models, stock, raw materials, contracts and goodwill, to his splendidly named son - Lewis Weston Dillwyn. Haynes finally retired in 1810, and the scene was set for the next significant player in South Wales’ porcelain passion play to take centre stage. William Billingsley – the man who was to assume a starring role in British pottery through his work at Worcester, Wirksworth, Derby, Mansfield, Pinxton, Torksey and ultimately Coalport - was waiting in the wings to make an appearance at Swansea, but not before he had taken his touring company of innovative ceramicists to one more ascetic venue. He was to earn singularly rave reviews for the consequent outturn from a brief but brilliant stint at his manufactory in the otherwise nondescript Welsh village of Nantgarw – a name which was to well and truly put Wales on the map as one of the foremost sources for the very highest quality porcelain.

The production of Haynes’ “opaque china” evolved apace once the Dillwyn’s were managing the Cambrian works, and the family were keen to engage the most capable artists available to make the best use of the fine material that they were now producing. To this end, a Mr William Weston Young was taken on, already renowned for his ability to reproduce natural history subjects which he would pain from life, being “remarkably truthful and free in his declinations”. Lewis Dillwyn was a published naturalist and member of the esteemed Linnaean Society – dedicated to the documentation of the world’s flora and fauna - and had previously used Young to illustrate his studious and compendious books.

At Derby, meanwhile, Billingsley – initially an apprentice under William Duesbury – had come to the end of two decades of service at the pottery during which time he had established a reputation which saw him described as “a man of great genius, of extraordinary talent, of extreme ability as an artist, and of skill as a practical potter”. At this point Billingsley was in his mid thirties and resolved to make his own way in the world and, in spite of the best efforts of the Derby pottery to retain his services, he set up a modest manufactory in partnership with a Mr Coke at Pinxton near Alfreton. This was to be the start of Billingsley’s peculiar odyssey – moving from place to place, staying nowhere for any significant period but always adding to his growing reputation and improving his depth of knowledge and level of expertise. Pinxton held his interest for just four years, before making the short hop to Mansfield where he stayed for a similar lenth of time; then to Torksey in Lincolnshire, then Wirksworth near Matlock - but the commercial failure of this last venture prompted Billingsley to take up the offer of work at the esteemed Worcester pottery under the auspices of the second generation of the Messrs Flight and Barr. Here, and in cahoots with his son in law Samuel Walker, Billingsley continued to work primarily as an artist but also accumulated an even more complete understanding of production processes and materials. Samuel was credited with the installation of innovative new kiln technology at Worcester, and perhaps with this new technical expertise added to his own repository of knowledge, Billingsley again determined to try his hand at an independent business in his own right.

And so it was in November 1813 that Billingsley and his family decamped to South Wales, purchased Nantgarw House on the Glamorganshire Canal, and resolved to set up their own manufactory. It was outwardly an auspicious location; coal was a readily available resource, the canal provided a means to bring further materials to the works and to transport finished products to market, there was a mill already extant to grind and crush the constituent parts of the pre-processed bisque, and overheads were low. Everything seemed set fair for the skilled partners to make the most of their new endeavour.

Once installed at Nantgarw though, however auspicious their circumstances may have appeared, Billingsley and Walker found it increasingly difficult to pay their way, and they soon looked to secure both private and publically available funding to underwrite proceedings. These machinations included an application to the Board of Trade, who duly arranged a visit to assess the viability of the business, to be carried out by none other than Lewis Dillwyn of the Cambrian Pottery. Suitably impressed with what he saw, and in addition to approving third party subsidies, Dillwyn invited Billingsley to relocate his operation wholesale to newly constructed and entirely bespoke premises which were to be erected alongside the existing Cambrian Pottery works for his exclusive use.

This short lived agreement did not, however, prove to be an unqualified success as although the quality of material that the partners produced was of the highest standard, there were so many delays in the building process, experimental and largely abortive production runs to refine the outturn of the ground-breaking kilns - and so many unsound or flawed batches as a result - that a sufficiently viable quantity of saleable material could never be produced with any degree of consitency.

Billingsley was ultimately to fall foul of an agreement in to which he had previously entered with Flight & Barr at Worcester which precluded him from using any of their technology at a different manufactory and, regardless of the rights and wrongs of this arrangement which would now be deemed a restrictive practice, Dillwyn took umbrage at Billingsley's perceived impropriety and suggested that he remove himself from his newly appointed annexe at the earliest opportunity, barely two years after having welcomed him on board with open arms.

Duly chastened and in the November of 1817, Billingsley and Walker thus repaired back to Nantgarw to lick their wounds and reconvene. This time, however, they were fortunate enough to secure significant private funding and were able to get over their initial teething troubles to such an extent that their works "surely made their way (upwards) in the public estimation". A signature service was produced and presented to the Prince of Wales, which greatly enhanced the reputation of the factory in the esteem of the highest social circles and was to ensure a regular flow of commissions for high-value work. Having already been lucratively engaged to supply undecorated pieces for subsequent decoration and re-sale by several of the foremost London-based producers, Billingsley and Walker were then approached by John Rose of the Coalport works – who proposed a more complete and effective solution to what he perceived as the threat from an upstart competitor by offering a sufficiently attractive package to secure the exclusive services of the sought-after craftsmen. Almost at the drop of a hat in April 1820, Billingsley and Walker jumped ship to Rose’s production facility in Shropshire, leaving the title deeds, the full inventory of effects and a large repository of unfinished pieces to the same William Weston Young who had worked under Dillwyn at the Cambrian works, and who had long been one of the projects most significant private backers from the time he had first advised Billingsley of Nantgarw’s likely suitability as a location. Young tried manfully to ensure that the works continued as a going concern, but lacking the ability to call on the technical nous which had decamped to Coalbrookdale, his ambitions were always destined to founder, and after a brief but glorious spell where some of the existing blanks were exquisitely decorated by a Thomas Pardoe, the last significant sale of Nantgarw porcelain took place in October 1822. Pardoe’s son was to fire up the kilns on the banks of the Glamorgan Canal again almost a decade later, but now production was limited to brown-glazed Rockingham earthenware, stoneware and – ultimately – clay pipes in vast quantities.

Other porcelain producing concerns also briefly played bit parts in the broader picture of South Wales’ ceramics industry; disaffected employees from the Cambrian Works set up The Glamorgan Pottery – also in Swansea – in 1813; this in turn was bought out by Dillwyn’s enduring business in 1837, before being closed down a year later. Former employees then decamped to Llanelly to begin the South Wales Pottery, but neither of these later concerns were able to rival the quality of material which was engendered by the travails of Haynes, Dillwyn, Young, Billingsley and Walker during their years at the pinnacle of their trade.

Of William Billingsley we shall read more anon – his name is writ sufficiently large in the annals of British porcelain’s history as to demand its own dedicated chapter - but for now you would do well to remember that for all the lustre and renown of the famous manufactories in London, the East Midlands and The Potteries themselves, South Wales Swansea and Nantgarw merits its place alongside any at the top table. 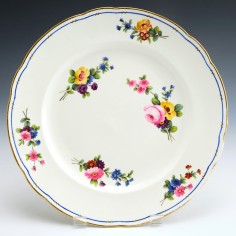 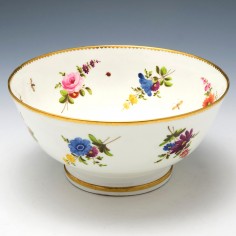 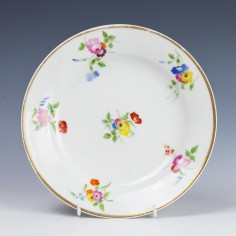 The shape and decoration are highly indicative of Swansea porcelain. The duck egg blue under a lamp is quite conclusive. 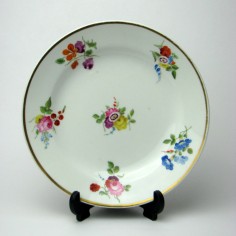 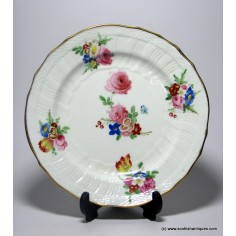 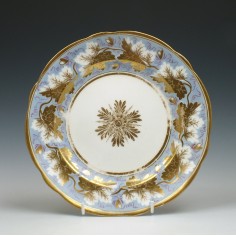 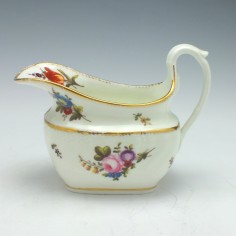 Swansea porcelain sucrier for connoisseurs to be both used and appreciated 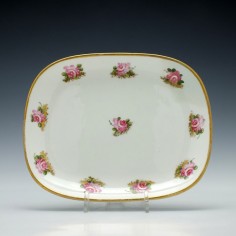 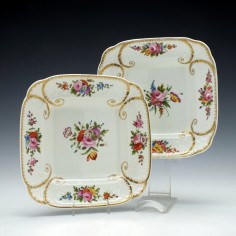 A fine example of Swansea porcelain. Painted with a spray of flowers and elaborate gilding 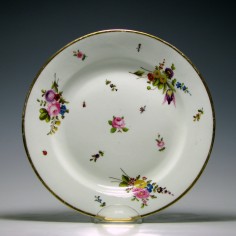