The history of Bow porcelain and a significant part of English porcelain history begins at Stratford at Bow, little more than a village, some two miles east of the farthest extent of London England and it's ever-growing sprawl. It sat in isolation on the River Lea, crossed by the bow-shaped 12th century bridge which had given the settlement its name.

Also on the river, though a little to the south of the Roman road which headed off towards Colchester, was a site now known as Three Mills Island, where even then there had already been industry of varying sorts for almost 750 years including piggeries and slaughter houses, a source of bone ash.

The founders of the Bow porcelain manufactory were a Dublin-born artist by the name of Thomas Frye and a Welshman, Edward Heylyn, Frye was an accomplished portrait painter and engraver. Heylyn looked to make his way in any number of different fields, with sundry diverse schemes underwritten by his family’s not insignificant wealth. It was as a merchant that he was probably best known, trading with the New World, particularly outposts in the Carolinas, where his brother owned tracts of land. It is likely that these two men met in the Saddler’s Halls at Cheapside, with Frye taking studies for portraits, and where Heylyn was installed as a Freeman of the City of London as a result of his father John’s standing (he had made a fortune supplying saddles to the armies of the Duke of Marlborough). Edward also carried out experiments with glassmaking in Bromley, just south of Bow, and would therefore have been at least partly appraised of the use of kilns and where to source raw materials.

The key to these two gentlemen taking up an interest in ceramics had its roots – as did the industry as a whole – in the Far East and Chinese imported blue and white porcelain. Research was going on across Europe as to how best replicate the highly sought-after porcelain , with the source for china clay – the most vital of ingredients – primarily being material taken from Chinese trading vessels when used as ballast. The masters of the Oriental manufactories soon realised that they were quite literally handing the secrets of their trade and porcelain manufacturing to would-be competitors and accordingly deprived the early European ceramicists of raw material; the search was, therefore, well and truly on for an alternative supply.

Heylyn’s trade routes in to the Eastern seaboard of the United States would have made him aware that the indigenous people – Cherokee Indians, who were renowned for producing some remarkably high-quality pottery, as they were able to take advantage of local deposits of fine, white clay which was a close match to the Chinese material. He imported quantities of this clay, given the name “uneka” by the Indians, to London – via his mercantile links with Bristol and Leith. Initially, Heylyn and George Arnold (see below) purchased a house close to St Mary’s Bow church, and – working with Frye - established some rudimentary kilns in the large gardens of the property, which backed on to what is currently Grove Hall Park. The new partners had some initial success, to the point that in October 1744 they were able to draft a patent for the production of a fine china, utilising “uneka, the produce of the Chirokee nation in America”. The salient part of this patent application, ratified in the in the names of Heylyn and Frye in December of that same year, states that they had developed:

“a Method for the Improvement of the English Earthen Ware, and have at last invented and brought to perfection, a new Method of Manufacturing a certain Material, whereby a ware may be made of the same nature or kind, and equal to, if not exceeding in goodness & Beauty China, or porcelain ware imported from abroad.”

Archaeology has revealed a number of kilns in the area of the Grove Hall site, with a large amount of “wasters” in situ, indicating that, although the basic mechanics of the production process were in place, the ability to produce saleable quantities of finished material was lacking. The patent was issued to Heylyn as being “of the Parish of Bow, in the County of Middlesex” which indicates that he was, at the time, working somewhere to the west of the River Lea – namely, the Bow church property.

Heylyn called on local contacts from the glass trade to assist. Wholesalers John Crowther and John Weatherby, and Alderman George Arnold – a wealthy businessman known to Heylyn – were invited to participate. By the late 1740’s, sources of china clay in the west of England were able to provide sufficient and more readily available raw material, obviating the need for either misappropriated Chinese ballasts or costly Cherokee clays; Heylyn was well placed to obtain the crushed silicates also needed, and the ground bones from the Three Mills piggeries formed the final element of a second patent for porcelain production which was submitted in 1749. All that was needed was a factory big enough to support a worthwhile business, and the decision was taken to relocate. Again, modern archaeology has revealed the position of these new facilities, between Sugar House Lane and Marshgate Lane. It was an enterprise which was a perfect fit for the local geography, with the method, means, materials and manpower all having been drawn inexorably towards what would become the centre of one of the UK’s first – and foremost – porcelain production concerns.

Manufacturing was clearly scaled up to a commercial footing by February 1749, with the existence of the first Bow Porcelain Company invoice, issued to a Miss Bruce for the supply of “8 Arguile cups and saucers; 2 pint Sprig’d Mugs and 6 handled Sprig’d cups” for the princely sum of one pound, nineteen shillings and sixpence. Dated 7th of July of that same year, there is an insurance policy assigned to four of the owners to cover “…their China Manufactory in Stratford Road in the County of Essex”, so the move eastward was clearly complete.

The first evidenced pieces from the new factory - known as New Canton are extant examples of inkwells bearing both the date 1750 and the name of the premises. Thomas Frye took over the management of the factory, and looked to impose his own artistic influence. Products had tended to replicate oriental items and the early wares being contemporaneously produced by the rival Chelsea factory of Gouyn and Sprimont with their French influences. Frye recruited the most adept painters and modelers that he could find, The workforce under his control grew to around three hundred. Travelling salesmen hawked the Bow wares, and London based clientele were able to buy from two London outlets, “Mr Mitchell’s Toyshop…in Cornhill”, with “toys” being the name for miniature porcelain figures or a warehouse for wholesale biscuit-ware pieces. Both the reputation of the manufactory and its profits grew exponentially throughout the 1750’s, with sales approaching a present-day value of four million pounds a year in the middle of the decade.

Just as things seemed set fair for a prosperous and long-lasting future for all concerned, so did the first metaphorical cracks begin to appear in the Bow company. Thomas Frye was taken ill in the latter years of the 1750’s. He died in April 1762. His two daughters who had formerly worked as artists at the Bow factory moved on to similar employment at Worcester and Wedgewood. John Weatherby also died in the same year as Frye, and John Crowther fared little better, being declared bankrupt a few months later due to the failure of his glass wholesale business. Alderman Arnold had long since already expired (in 1751), and Heylyn survived until 1765 living out his later years in a state of growing financial discomfiture.

Crowther continued to operate the business, albeit on an increasingly precipitous downward curve. Frye’s expert workforce began to drift away, and the volume of finished pieces made wholly at Bow declined. Porcelain production did continue, but – increasingly – blanks were sold for decoration and finishing elsewhere by any number of different painters (all of whom were required to mark the pieces with the same red anchor and dagger mark, so the source of the blanks could be identified).

One of these artists was a certain Mr William Duesbury, who was to go on to great renown with his own works at Derby, and when the Bow premises finally ceased production in the mid 1770’s, it was Duesbury who bought up all the moulds, materials, printing plates and blanks, removing everything in its entirety to his factory in the East Midlands. 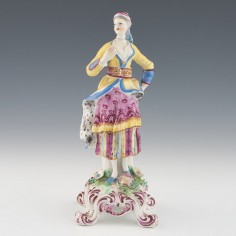 A Bow Porcelain Figure Of A Female Turkish Dancer c1765

A Bow Porcelain Figure Of A Female Turkish Dancer c1765 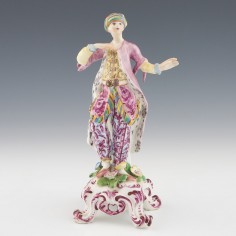 A Bow Porcelain Figure of a Turkish Dancer c1765

A Bow Porcelain Figure of a Turkish Dancer c1765 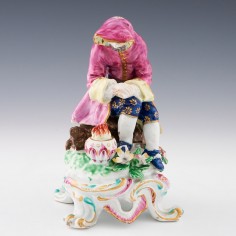 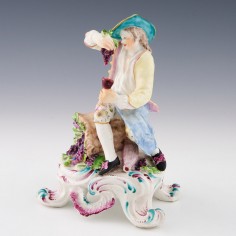 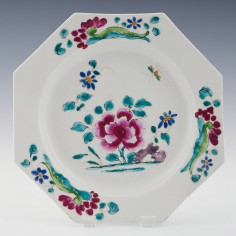 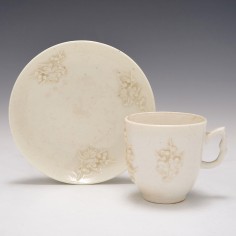 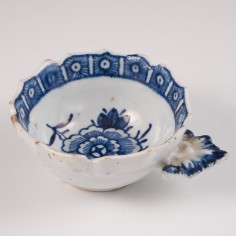 This has been problematic. My colleague and i both believed that this could be Derby or Bow. This example is larger than any of the known Derby examples. Secondly although Derby used a similar cell border pattern ( as well as diaper) there are substantive 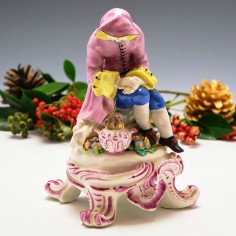 We have named this version of winter "Dave" in tribute to the great and sorely missed observational Irish comedian Dave Allen. Dave allen, bow porcelain, winter