THOMAS TURNER, CAUGHLEY AND THE INGRATE POTTERS OF SHROPSHIRE

Caughley – Shropshire pottery was founded by Ambrose Gallimore the brother in law of one Josiah Spode and was then expanded by Thomas Turner. Situated near the small town of Broseley and close to the cradle of the industrial revolution which was Ironbridge. The history of Caughley is integral to antique English porcelain development and 18th century porcelain study.

Taking its name from an existing residential property pronounced “car-flea” the site was at the heart of what was to become the white-hot crucible of English industry in the late 18th century; with transport links on the River Severn a stone’s throw away, easily accessible coal deposits, iron ore, clay and timber – even wagon-ways, the forerunner to railways, all immediately available the whole area had all the requirements any aspiring industrialist could wish for.

Ambrose was a Quaker and well acquainted with the early sorties in to porcelain manufacture by his spiritual fellows William Cookworthy at Plymouth and Richard Champion at Bristol. The china clay from Cookworthy’s mines in Cornwall had found its way to the nascent producers of Staffordshire, partly by way of barges on the River Severn, and Ambrose gacve thought as to how he might best turn his hand to a similar enterprise. Gallimore’s niece unwittingly had a hand in furthering this ambition as she had caught the eye of a talented artist and painter of porcelain who had been working in Worcester, one Thomas Turner. The smitten pair were eventually married after a lengthy courtship, during which time Thomas took over the lease on Caughley and began to develop the works to produce increasingly refined products.

A capable chemist and well versed in the manufacture of soapstone porcelain, Thomas travelled to France around 1780 to gain knowledge of the processes used at Parisian manufactories. He returned armed with an understanding of new skills and in the company of a number of capable craftsmen including an architect. This lead to the design and construction of Turner’s new home, Caughley Place near and the nearby porcelain factory that had thus far been limited to the production of albeit high-end earthenware and creamware was also to benefit from the addition of new, improved and extended facilities.

Production was for the most part intended to replicate the style of the original “china” products imported from the Far East, and there was a great demand for material in the decorative “chinoiserie” style copied from these original pieces as had occurred at Worcester porcelain. At Caughley, Turner had always leant towards this type of patterning, working alongside another ex-Worcester engraver, Robert Hancock. These two were then joined by a particularly adroit exponent of the art in the shape of Thomas Minton, and – with the assistance of an engraver called Thomas Lucas – the Salopian China Manufactory, as their business was now named, had assembled what constituted the 18th century “dream team” of Chinoiserie decorators, and began to produce the first readily identifiable pieces of underglaze blue Caughley blue and white.

Caughley seems to have carved a niche for itself by producing a range of slightly odd pieces – not for Mr Turner and his colleagues the run of the mill fare which was dinner services, tea and coffee cans and vases to mirror the products of their contemporaries. I’m sure that other producers also turned out scallop-shell relish dishes, porcelain monteiths (known as verrieres), medicinal eyebaths, purpose-made asparagus servers, miniature full tea-sets, radish/root vegetable plates, disguised-mask pitchers, small perforated dishes (often wrongly identified as being tea strainers but in actual fact used to serve poached eggs) and writer’s pounce pots, but Caughley’s inventories do seem to include proportionately more of these slightly arcane articles than those of other manufactories, and a collection of these oddities would make for a very engaging display indeed.

The same family ties which had helped give rise to Caughley then sowed the seeds of its demise, as Lucas and Richards both left Turner’s employment in around 1783 to work for the aforementioned Josiah Spode who was by now producing a more refined type of willow-pattern transferware at his premises at Stoke on Trent. Two years later, Minton struck out on his own, also settling in Stoke, where – in cahoots with Spode, and evolving the original Caughley engraved printing plates – he was to formalise English willow pattern designs and go on to carve, decorate and overglaze his own niche in the porcelain hall of fame.

Prior to these departures and/or defections, Turner’s business at Caughley had prospered, and the Salopian China Manufactory acquired a substantial warehouse in London to showcase and dispense its wares to the affluent marketplace in the nation’s capital. Housed in the former Lincoln’s Inn Old Playhouse Theatre in Portugal Street (now the site of the Royal College of Surgeons) this was to later see serve as a warehouse for both Copeland and Spode’s London ventures.

In 1783, Robert Chamberlain was to set up a factory at King Street in Worcester, and immediately became a valuable customer for Thomas Turner, buying in a great many unfinished blanks for decoration and onward sale. The Caughley works still applied the basic transfer prints, but they were finished with overglaze enamelling and newly-fashionable gilding at Worcester; the fact that Caughley did the spadework and Worcester reaped the rewards mirrored the fact that Thomas had helped to underwrite Chamberlain’s initial investment, and then watched as his protégé went on to take the plaudits for the finished pieces that were sold.

Turner not only shared a great many of his own manufacturing secrets (developed in a purpose-built laboratory in the attic space of Caughley Place) with Chamberlain, but also provided financial assistance when Robert moved to an expanded facility at Severn Street in 1788, which went on to manufacture its own porcelain, thus ending the need for blanks to be sourced from Caughley at all. Turner’s largesse and generosity contributed yet further to his ultimate demise with the career of one John Rose. The son of a neighbouring farmer, Rose was taken under Turner’s wing, taught every aspect of the trade and then exhibited his gratitude by moving out, taking over an existing pottery at nearby Jackfield and immediately pursuing the production of porcelain in direct completion to Caughley. Rose soon moved his business over to the other side of the River Severn at Coalport, went in to partnership with his brother Thomas, and Messrs Anstice and Horton, and proceeded to make such a resounding success of things as to “greatly reduce the works of Mr Turner and gradually beat them out of the market”.

Thomas was now some 50 years of age, and becoming incapacitated through increasing ill-health and in 1798 he drew a line under the burdensome load of running his own business in the face of competition which he himself had helped to flourish, and sold the Caughley works to Rose. The coal deposits on Ambrose Gallimore’s old estate had also begun to run out, and Rose noted that it was becoming more and more unsustainable to transfer Caughley blanks over the river for completion at Coalport. The risky nature of this journey was underlined in October 1799 when a ferry carrying kiln workers and painters capsized whilst under the control of an intoxicated master and twenty-nine people were drowned. Rose began to gradually run down production at Thomas’ original factory, relocating or laying-off staff, dismantling the facility brick by brick, and then re-using the same materials to enlarge the Coalport works. In the midst of this gradual cannibalisation of his factory and home, Turner died in 1809, watching the success of yet another one-time apprentice grow until it surpassed that of his own, having been built quite literally on the ruins of his business. The dénouement came in 1821 when the remaining parts of the Caughley works and its late owner’s home were demolished, leaving us with the current state of affairs where the site shows nothing more than a few imperfections, lumps, bumps and residual foundations to pique the interest of local archaeologists and antiquarians in the otherwise green and pleasant Shropshire countryside. 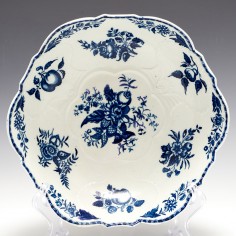 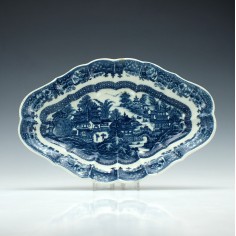 A lozenge dish from Caughley porcelain in the Full Nanking pattern. English antique porcelain from the Scottish Antiques online