Emile Galle was one of the foremost artists of 19th France; innovative, intelligent and adroit, he left a singularly impressive legacy of ceramics, glassware, illustrations and writings. Emile was born to appropriately-inclined parents at Nancy in 1846; His father was an accomplished painter who specialised in enamelling in later life, while his mother came from a family of faience and crystal glass dealers.

Emile studied in France and Germany, and was apprenticed to the Meisenthal glassworks and the prestigious Lunéville-Saint-Clément pottery before joining the family business in 1867. Well versed in mineralogy and botany, he accrued further knowledge in London and Paris before returning home and beginning his career in earnest.

The representation of elements of the natural world was his prime motivation during these early years, using experimental techniques to replicate textures, patterns, reflections and refractions which occurred in nature. As the production capacity of the company grew, Galle insisted on maintaining a hands-on role as overseer, and would not permit anything which replicated (rather than represented) any botanical material without having personally approved its accuracy. The last decade of the 19th century saw a shift towards the use of sea-life themes, replicating coral, seaweed, shells anemones and similar – all based on Galle's personal observations of the 'original'.

Galle received many plaudits for the items he exhibited across Europe and North America during the fin de siècle. Somewhat unusually for a craftsman, he was also an acute and interested observer of political machinations, and would use allegorical pieces to comment on matters which interested him; predatory bears representing states with expansionist ideas, convoluted tendrils for the intrigues and conspiracies of politicking, rivers and their resident creatures as national borders - not to mention more overt symbolism regarding national identity and patriotism.

Highly regarded by his peers, Galle was able to call on many eminent colleagues to collude with both his work and broader ideas. He had a hand in establishing educational facilities, healthcare protocols and even early conventions with regard to genetics – but, of course, it's the glassware which is of primary interest to us.

For an appreciation of his abilities, it may be best simply to catalogue some of the different processes, styles, production techniques and finishes that he was able to master during his career. Starting with enamelling on clear crystal under his father's tutelage, he used his understanding of minerals and their properties to produce opaqued materials which were either engraved or etched with floral designs in to laminated cameo-glass. He went on to work with refractive inclusions, metallic particles and foils, pulverised ore and bubbles; this ultimately lead to a patented process known as "glass marquetry" which involved pressing pre-formed elements in to the still-molten base form of vessels. Acid-etching on to numerous substrates was a particular forte of Galle and his staff; they were able to exercise a supremely delicate touch during the process, and not just "cut to clear", but remove infinitesimally and progressively thinner layers of glass to create delicate gradations of tinting.

Suffice to say that by the time of Galle's death in 1904 there was an extraordinarily high quality legacy. The factory remained in operation until 1936 as does the high regard in which anything bearing the Galle name is held – the nature of his art will ensure that this remains the case in perpetuity 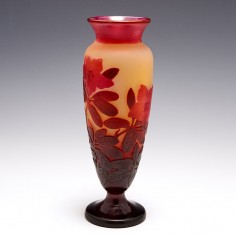 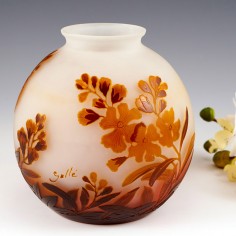 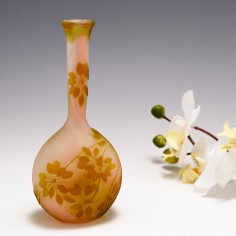 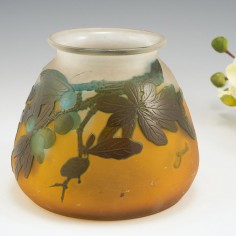 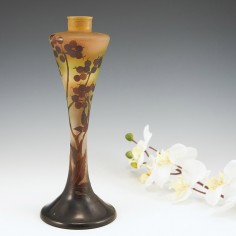 The base retains part of the original Galle paper label featuring Nancy and Paris and another but complete label for Forterre the Strasbourg Porcelain and Glass retailer . A Galle Cameo Glass Slender Lamp Base 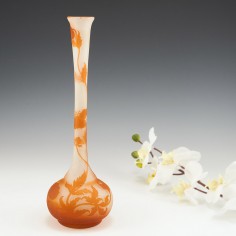 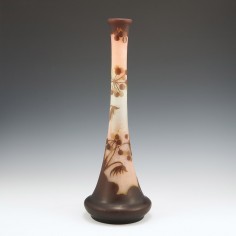 A Tall Galle Botanical Cameo Glass Vase c1900. There is a partial original retailers label from Bordeaux adhere to the base 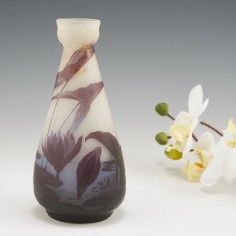 Galle produced aquatic cameo glass vases below and above water level. Those with dragonflies are amongst the most highly sought-after. 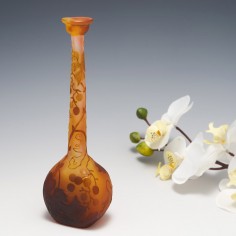 Cameo signed Gallé with latin script e. It is good to see an example with the trumpet rim intact, they are all too frequently chipped or have been ground off 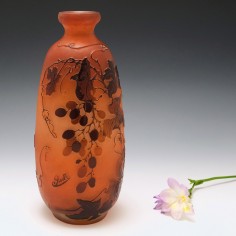 Brown 'Tardive' grapes and trailing vines against a muted red-brown ground Marks : Galle with epsilon bisecting the lower tail of the G 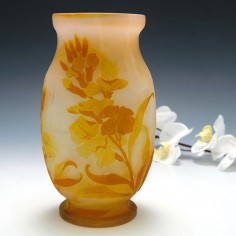 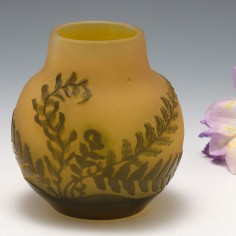 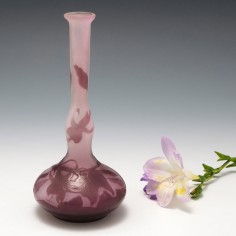 Lilac and mauve fuschia flowers and leaves, this is cameo signed Galle 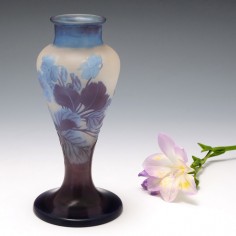 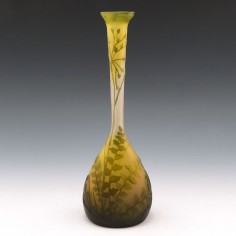 Inspired by aquatic flora. Galle took much of his inspiration from the natural world. 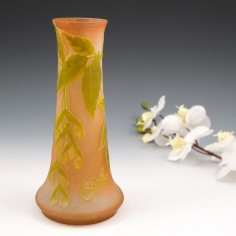 The genius that was Emile Galle passed away in September of 1904. His widow Henriette addec the start to the cameo signature until late 1906. 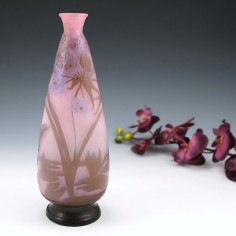 Pale lilac flowers above plum leaved and stems on a mauve ground. Another prime example that demonstrates the strong influence of nature within the Galle repetoire 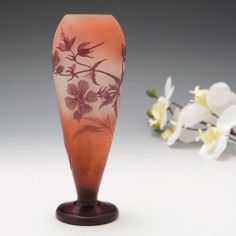 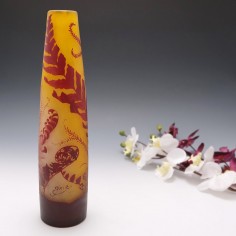 Galle took his inspiration from the natural world. There are numerous examples of cameo glass with various flowers, others feature marginal plants such as Irises. water lillies and dragon flies. This is te first example of his perspective beneath the sur 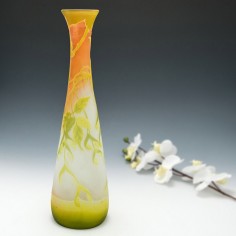 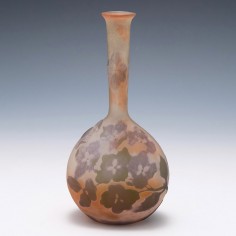 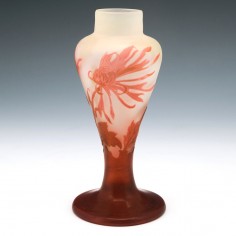 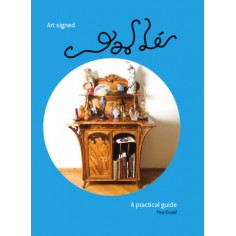 Tiny Esveld is an internationally renowned authority on the glassware of Schneider, Galle, Daum and the Ecole De Nancy. With six hundred images over its three hundred pages this relates the story of the Gallé family. From the solid financial foundations p