Tracing back the history of Sèvres Porcelain

Sèvres is the most prominent name in French Porcelain, but it was not the firsty. Porcelain had been manufactured in France to supply the country’s increasingly acquisitive aristocracy from the last quarter of the 17th century, with  production facilities at Rouen, Nevers, Saint-Cloud and Chantilly all looking to rival the output of Tschirnhaus and Bottger’s renowned factory at Meissen, Saxony (present-day Germany).

The German producers stole a march on their French competitors with the development of a hard, vitrified material from which to produce their wares in 1708, and it took the Gallic manufactories four years to partially replicate this higher quality product, having been furnished with the secrets of Chinese production techniques by a Jesuit priest, Francois Xavier d’Entrecolles, on his return from an extended trip to the Orient.

The French King, Louis XV and his “official mistress” Jeanne Antoinette Poisson, Madame de Pompadour, were both enthusiastic patrons of the arts and – keen to enhance the standing of home grown products – they underwrote the development of a porcelain factory in the semi-derelict remains of the Royal Chateau de Vincennes, a former hunting lodge on the South Eastern edge of Paris. Mme de Pompadour then later resolved to move the production to a site nearer to her new home, having herself relocated to the Chateau de Bellevue close to the town of Meudon in the Commune of Sèvres in 1750.

An architect by the name of Laurent Lindet was enlisted to oversee the construction and his three year project on a site formerly occupied by La Guyarde farm ultimately delivered an impressive four story building that looked far more like an extravagant country house than any sort of manufacturing site. The Vincennes facility has been operating under the auspices of the Italian artistic director Jean-Claude Chambellan Duplessis (who took on a French persona, having been born Giovanni Ciambellano, in order to circumvent the rules of the Parisian crafting guilds which precluded the acceptance of foreign students or apprentices), and it was Duplessis who was placed in overall charge of the new facility when it began production in 1756. Under his stewardship, the extravagant Sèvres rococo forms first became established, before beginning to evolve towards the signature “goût grec” neoclassical style which would set them above and apart from the products of other contemporary outlets.

From 1770 the Sèvres factory began to work with hard-paste porcelain in the true sense of the term, thus making the replication of the original Chinese style of ceramic ware possible and ensuring that Meissen was no longer the sole European source of this much sought-after commodity. In conjunction with the designs of Duplessis and his successors, the use of this high quality material ensured that Sèvres was able to take its place at the highest table of European porcelain production, and the lofty ambitions and aspirations of its Royal patrons were finally fulfilled.

The Sèvres porcelain factory had by 1752 a palette of one hundred and fifty three colours. Many of thse colours and the patterns in which they first featured have their own nomenclature. Bleu Lapis,, Bleu Celeste, Gros Bleu. Bleu Nouveau, Monochrome camieu, Lapis et Vert or Saffre et Vert, Poids d'Or, Pontille, Oeil de Perdrix, Petit Vert, Merde d'oie to name but a few. If there is a specific pattern and colour that you are looking for then we would love to hear from you.If you are not a Sèvres collector then we hope that the images and descriptions are still enjoyable to peruse. 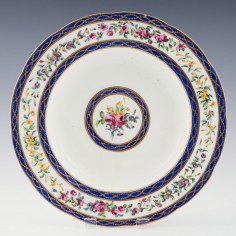 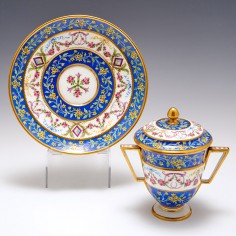