Meissen is one of the singularly most notable names in the panoply of porcelain’s highly regarded manufactories, so revered for its finesse and high quality as to be known as a watchword for remarkably exquisite material and workmanship. As a departure from the norm, I thought that I would take a look not at the vagaries of its production processes, or even by whom the constituent parts were crafted in to the finished pieces once the formulation had been developed – but rather why it was made in the first place.

As is the convention with porcelain, the name is taken from the place in which the material came to be produced, rather than that of its progenitors or manufacturers, or the later stewards of what was to become one of Europe’s first properly recognised brands. We must look to what until recent times was best known as East Germany – and to the farthest extremities of this once arcane and archaic state, to a small town a few miles north and east of Dresden, and barely a decent day’s horse-ride away from the Czech border and the Bohemian hinterland beyond.

This meant that the town would have been found not only in the midst of its own margravate, or principality, but under the auspices of the Electorates of Poland and/or Saxony (an ever-fluid state of constant political flux) which, albeit by way of a somewhat convoluted set of circumstances, lead to the discovery of the hard paste porcelain for which the town was to become famous.

In spite of the advances in science which were to overtake the world with such impetus in the latter part of the 18th century and beyond, the early 1700’s saw a great many less empirical, long-cherished beliefs still having a great deal of currency, one of which was the enduring allure of potential riches to be made from from alchemy – the purported ability to effect the transformation of base metals in to gold. The pursuit of this ultimately fruitless quest drew a great many scholarly minds to centres of research, especially those which were state-funded, as was the case with Dresden where two individuals in particular were engaged in all manner of experimental work under the auspices of King Frederick I of Prussia and Augustus II of Poland – a perpetually impoverished leader who was always on the lookout for an easy source of fiscal betterment.

The two gentlemen in question were Ehrenfried (Walter) von Tschirnhaus and Johan Böttger, with the latter engaged specifically to explore the possibilities of fanciful gold fabrication by Augustus. Tschirnhaus, some thirty years the elder of the two, was perhaps more circumspect and had, by 1704, produced some remarkable results in the development not of synthesised gold, but of porcelain. This may seem a strange departure from the general sphere of endeavour in which others were engaged, but genuine Chinese porcelain, widely known throughout Europe and manufactured in the Orient by entirely obfuscated means, was so highly regarded as to have almost the equivalent value of gold – and certainly that of silver – so it was an equally sought-after commodity, and ownership of a viable production facility was just as attractive a proposition to avaricious heads of state.

To his credit, Augustus recognised the potential of Tschirnhaus’ work, and set him up in a state-funded laboratory on Brühlsche Terrasse in Dresden, but with significant monies both made immediately available and promised pending favourable results, Ehrenfried was unable to take advantage of his king’s largesse – largely as a result of suddenly dropping dead in October 1708. Unsurprisingly there was a brief hiatus in the work, until a gentleman by the name of Melchior Steinbrück arrived on the scene -nominally to administer Tschirnhaus’ estate - in March of the following year. Steinbrück noted the existence amongst Ehrenfried’s effects of the recipe for his strikingly fine porcelain, and was moved to discussed the matter with Böttger who up until this point had been nominally under Tschirnhaus’ tutelage, though having shown little interest in his master’s work in replicating Chinese pottery. Steinbrück evidently managed to convince Böttger that there was far more potential in developing porcelain than there would ever be in pursuing his futile and increasingly fallacious quest for Goldmachertinktur. Johan immediately took this sage advice on board and barely eight days after first meeting Steinbrück, he presented himself to Augustus and announced unequivocally and with great fanfare that he was able to reproduce Chinese porcelain.

Augustus was beyond rapture to be presented with this discovery which was tantamount to a license to print money, and – by royal proclamation – Europe’s first porcelain manufactory was immediately incorporated and would open the following year in The Albrechtsburg – an imposing gothic castle looming over the River Elbe in Meissen, which was the former palace of the Wettin dynasty who once ruled Saxony and Thuringia. The concern was given the suitably regal name of the Royal-Polish and Electoral-Saxon Porcelain Factory (Königlich-Polnische und Kurfürstlich-Sächsische Porzellan-Manufaktur), and with its regal provenance thus established from the very start, it was almost inevitable that the products would come to be positioned at the very highest table in the firmament of finery which is today’s most collectable porcelain. 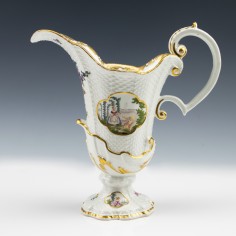 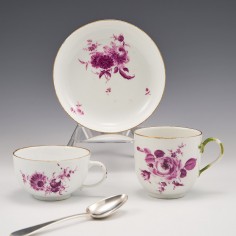 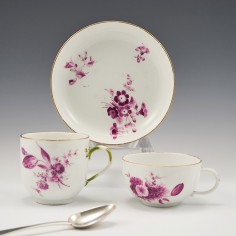 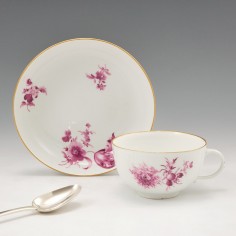 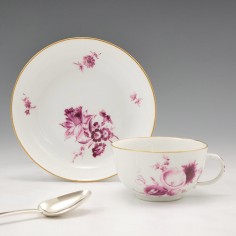 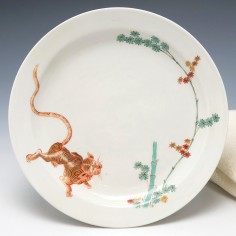 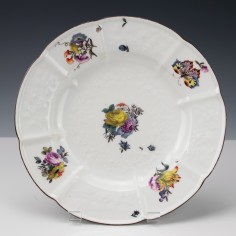 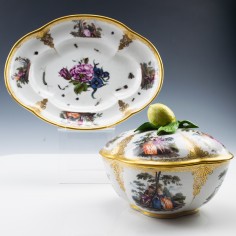 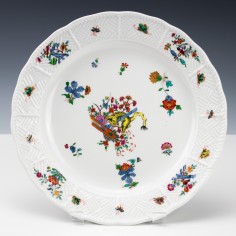 A Meissen "yellow lion" plate from c1745 in excellent condition 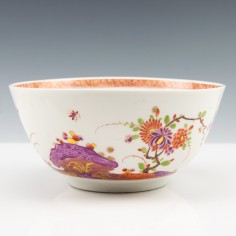 The pink purple lustre invented by the chemist Johann Friedrich Bottger is a gold based compound. The analysis of the chemicals used in both the bodies , enamels and glazes has been studied extensively. This can provide empirical dating evidence. 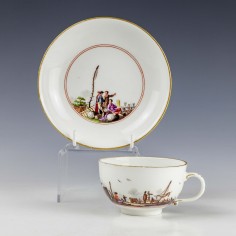 Antique Meissen porcelain Teacup and saucer. The Meissen factory lead the way in the development of European porcelain in the 18th century