Arts and Crafts furniture in Britain was produced in the late 19th and early 20th century in several regions primarily across England, Scotland and Ireland

The most important makers were situated in the Cotswolds. The Cotswold School had the Edward Barnsley workshop and Ernest Grimson and following relocating from London in 1902 the Guild of Handicraft lead by Charles Robert Ashbee

The Lakeland school could count on several important Arts and Crafts architect designers such as Mackay Hugh Baillie Scott at Blackwell House in Bowness on Windermere and CFA Voysey at Broadleys just down the hill on the edge of the lake itself. Arthur Simpson in nearby Kendal being commissioned to provide both furniture and interior carved wood panelling. The Keswick School of Industrial Art founded by Harold Stabler and Canon Rawnsley taught several disciplines under the A&C ethos that continued into relevantly recent years

In London Liberty and Co offered an extensive range of hand-crafted furniture alongside a superb range of complimentary furnishings and fabrics calling on the services of celebrity designers including Archibald Knox and Jessie M King for silver and Jewellery and Leonard Wyburd for furniture all of who influenced the Arts and Crafts movement.

The Glasgow style is most widely associated with the names of Scottish architect Charles Rennie Mackintosh and Herbert McNair alongside their respective wives Margaret and Frances MacDonald were seen as a gifted ‘Glasgow Four’ whilst other city luminaries and immortals of the Glasgow School of Art included George Walton, Ernest Archibald Taylor and George Logan, collectively known as the Glasgow school. 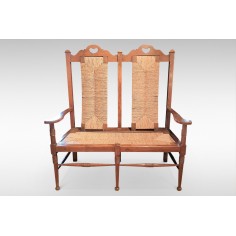 Arts and crafts furniture is still widely admired particularly in the United States. This was produced by William Birch of High Wycombe to a design by George Walton