I became Chairman of the Hoard Limited (ScottishAntiques.com) in 2019 and have overseen the relocation of the business to Tunbridge Wells. We have now opened our doors at the Corn Exchange on the Pantiles, welcoming visitors since the summer of 2021.

With luck I am most well-known for my appearances on BBC Televisions ‘Antiques Roadshow’, since 1981, and in more recent years on the ever popular ‘Bargain Hunt’.

My other TV appearances include ‘Put Your Money Where Your Mouth Is’, and both ‘Restoration Roadshow’ and ‘Antique Master’ the latter which I co-presented with Sandi Toksvig.

Having spent thirty two years working for Bonhams auction house in London, I now eke out a living as Chairman of The Hoard Limited (ScottishAntiques.com) and as both a valuer and lecturer for the same.

On an academic level I have lectured at the Victoria & Albert Museum, the British Museum and many important national museums and galleries not only in the UK but also Australia, Canada, the USA, South Africa, the Czech Republic, France and Germany.

I am a Fellow of the Royal Society of Arts and the University of Central Lancashire, whilst holding an MA (Honorius Causa) presented by Southampton Solent University and was also honoured to have the Freedom of the City of London bestowed in 2000.

Much of my time over many years has been spent researching and writing multiple books on subjects such as Victoriana, Royal memorabilia, Art Nouveau and Art Deco material and Rene Lalique's art glass - these are all available from both our website and Tunbridge Wells outlet.

I am a long-time ambassador for the Prince's Trust as well as a patron of several Museums and numerous charities.

The majority of online-only antique businesses are hampered by the relative anonymity of their personnel. The team at ScottishAntiques.com have built a great platform and a loyal customer base. The original founder and owner, the knowledge and driving force behind this growth business all remain intact. The Corn Exchange project will astound all who see it.

I am proud to be the public face of the business, and am delighted to have been appointed Chairman to help oversee what will be a fascinating period in the development of the company. We are to be found on eBay as 'eric-knowles-the-hoard', but to say this is Eric Knowles Antiques would be a great injustice to the rest of the team, as we have four other specialists who can all be counted upon to provide the benefit of their experience and knowledge.

I am looking forward to meeting many of you at forthcoming speaking events and also at our physical premises in the Corn Exchange on the historic Pantiles,  Royal Tunbridge Wells. 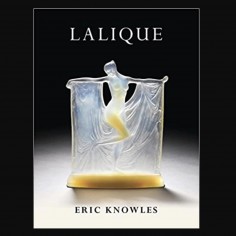 Lalique - By Eric Knowles. Last year Andy McConnell assayed an opalescent Rene Lalique Suzanne figurine on the Antiques Roadshow ( it was missing the brass base on which it would have stood to be illuminated). In conversation with Andy a few weeks ago he