In the tradition of the finest Georgian philanderers and gallants, it’s time to take a somewhat discourteous and almost certainly uninvited look in to the boudoir of a late 18th century lady – specifically with a view to inspecting the items on her dressing table.

As we’ve noted, glass in the late 1700’s was used to make many and varied domestic items, not just drinking glasses and tableware. Smaller – but no less elegant – decorative accessories would have been dotted around the home fulfilling all manner of purposes.

Sophisticated antique Georgian perfume bottles, scent bottles and atomizers would come later, during the latter 19th century, but there were moulded, cut and gilded bottles for centuries before. The fragrance that they contained was nothing more sophisticated that water and perhaps oil infused with herbs or floral preparations, simple ‘masking’ scents, intended to overpower the natural fragrances which would have been endemic across a society which predated the advent of readily available soap and running hot water, rather than anything close to the synthesised scents of La Belle Epoque and beyond.

The second most important facet of 18thcentury make up was to ensure that one looked as pale as possible. This was to give the impression of being as far removed from the ruddy-cheeked, sunburned labouring sorts as possible – to be pale of skin indicated that one was able to remain stoically indoors all year round, pursuing urbane and seemly pastimes rather than having to do any work – perish the thought!

This sought-after anaemic complexion was achieved by plastering your face with whitening powders or creams, which contained toxic amounts of lead and, of course, required either shallow dishes or lidded jars in which they could be kept. Unfortunately, other uses for such vessels would have been many and varied, so artefacts which were specifically intended for use with such unguents and pounces are virtually impossible to identify, but if all other options are exhausted when attempting to discern the use for some smallish, non-specific pots, dishes and jars, then “whitening container” is a widely used option.

Of course, one’s pristine white face was best complemented by the application of that most quintessential of Georgian accessories, the beauty spot, or ‘mouche’. These little discs of satin, silk or velvet were originally applied in order to hide the ravages of smallpox or any of the other many and varied scrofulous or syphilitic diseases of the day.

Splendidly though, and as is often the case where overt demonstrations were considered vulgar, the patches became used to communicate hidden messages, depending on precisely where they were placed. The intimation may be an assertion of allegiance to a political party, or a leaning towards specific social mores which were up for debate. Equally though, a well-placed patch might suggest that the wearer was more – or less – inclined to indulge in a full and frank exchange of views should the opportunity present itself - perhaps moreso when entreated by the advancement of cash inducement.

Whatever the message, the means of communication had to be stored – and the patches were kept, often in ornate tins or boxes, on purpose-made patch stands on one’s dressing table. There are lipped examples (with raised rims) which suggest that patches may have been kept “loose”, whereas the tin-stands have no rims, and are more like miniature tazzas.

A final adornment to offset the whitened base would have been indelicately rouged cheeks and bright red lips, both tinted with powder or paste made from a hydrate of carminic acid (hence ‘carmine red’). Either would have been kept in simple glass dishes, similar to the patty pans which would be found on the dining table downstairs.

An extended rummage on the dressing table may also reveal trinket boxes, pomades for storing either wig or real-hair styling ‘wax’ and receivers for collecting combed-out hair which would be used for making ‘ratts’, more wigs or pincushions, but as these pieces could just as easily have been made of porcelain as of glass, they are relegated to this cursory, closing mention. 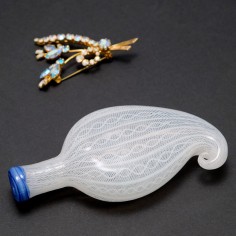