Georgian wine glasses with incised twist stems had a relatively short period of production from 1750-1765 in England according to most authors. So called incised twists were manufactured in Wallonia from the late 17th century. However, they are not incised which implies external tooling, they just have the appearance of being produced in that manner. The stems were made in a straight-ribbed mould then drawn and twisted. They will exhibit snapped pontil marks below the hand blown foot and the bowls invariably have strong pucella marks.

This stem type is much underrated and is comparatively rare in English lead glass compared to air twists and opaque twist wine glasses. Examples with single knops and multiple knops are very rare indeed on wine glasses but are more frequently found on sweetmeats and candlesticks. Incised twists are found on gin and other georgian drinking glasses

There are occasionally examples to be found in soda glass and these are invariably quite poor in quality with some notable exceptions especially those that have been attributed to the Belgian glass house of Sebastien Zoude who worked with lead metal in the second half of the 18th century. Both the Bonhomme and Nizet manufactories in Liege also produced some fine specimens from the second quarter of the 18th century. Good English and continental examples merit a place in any glass collection irrespective of origin. 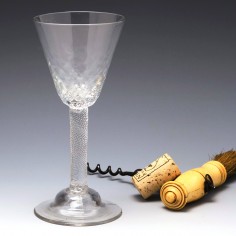