The development of dessert wine glasses and traditional port glasses in 18th century Britain arose from a combination of politics and British entrepreneurship. In the late 17th century Charles II increased duty on the import of French wines as a retaliatory measure against restrictions imposed on the export of English goods on to the continent. He later banned the import of French wines altogether leading to merchants seeking alternative sources of supply, including smuggling.

The wines of the Douro valley Portugal suited the English palate. Both English and Scottish merchants seized the opportunity. These wines took their name from the city from which they were shipped, Vinho Opporto became simply known as Port Wine in English. To begin with the wine was not fortified however to preserve the wine during shipment and prevent commercial losses it was fortified with brandy of grape spirit from the second half of the 18th century

The sweeter, stronger and more aromatic fortified wines became a British staple. The development of tapered bottles that could be stored in cellars lead to the production of vintage port by 1775. The trade was curtailed during the peninsular wars but surged again after Arthur Wellesley, The Duke of Wellington, himself a lover of Port, drove the French out of Spain and Portugal. As a result Port became the greatest fortified wine in the world today.

Port glasses evolved as smaller versions of Georgian wine glasses. There are drawn trumpet examples, small facet cut, air twists and plain stems with a folded foot and snapped pontil marks. Typically their capacity is much reduced compared to a Georgian wine glass and they are not as tall as the equivalent wine glass of the same form. Antique Port and dessert wine glasses are a joy to use and are a great talking point at the dinner table 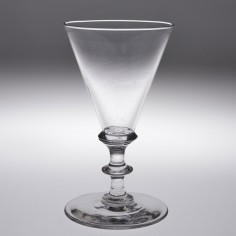 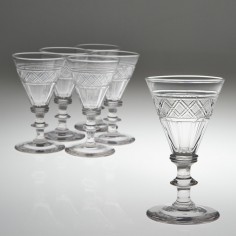