The Baccarat Crystal company – based in its eponymous home town situated in France’s Grand Est region – first began producing glass paperweights in the mid 1840’s. This was a considerable length of time after its foundation in 1764, although the intervening years allowed the company to grow and establish its reputation as one of the world’s leading crystal manufacturers. This followed a less auspicious start in life when – under the name of Verrerie de Sainte Anne – production centred around bottle and window glass.

Once undertaken in earnest, though, creation of the renowned lamp-work and concentric millefiori glass paperweights was to thrive until around 1860. This fifteen-year span in the mid 19th century later being regarded as Baccarat’s ‘Classic Period’, noted for the use of silhouette canes. Examples of items in excellent condition featuring these canes account for some of the most sought-after and collectable of Baccarat glass paperweights.

It was not just the silhouette canes which made the Baccarat paperweights stand out – a list of some of their other commonly used canes includes white stardust, green bull's-eye, shamrock, sawmill, quatrefoil, cog and arrow canes.

The company’s enthusiasm for the creation of such glass paperweights dwindled until it reduced to little more than a side-line, with only a few new designs being catalogued in the years immediately preceding the Great War. These were substantially less intricate than the glass paperweights of the Classic Period which featured millefiori and silhouette canes in abundance.

There was then, however, a renaissance of the Classic designs from the 19th century – both in their original form and by way of new interpretations – in what was known as the Dupont period of production from 1920 to 1934. This name is somewhat misleading, though, as it was the Messrs Boyé and Idoux who were the leading lights during this resurgence of popularity for the leading crystal manufacturers and their signature millefiori cane work.

Productivity again lapsed during the years immediately before and after WWII, and it took until 1953 for the company to once again begin manufacture at full capacity. This time it was a student of Boyé, Georges Brocard, who was the driving force behind the third ‘modern’ wave of Baccarat glass paperweight production. 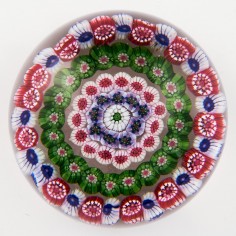 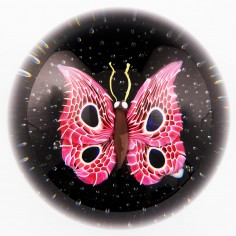 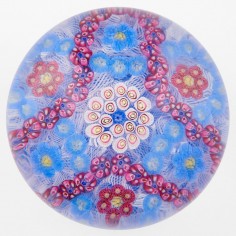 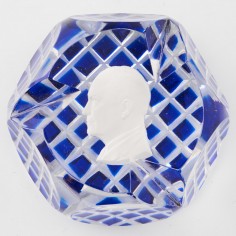