The Cristallerie de Clichy was an establishment contemporary with Baccarat, having been founded by Louis-Joseph Maës in 1842 (who was relocating from Boulogne). The Director of Works at the new site in  Clichy la Garenne, Louis Clémandot, immediately set about trying to implement innovative techniques and the use of novel materials. This was an attempt to provide distinctions from their competitors, and was perhaps most evident with regard to his use of colouration.

Largely as a result of Clémandot’s work, Clichy millefiori paperweights became renowned for the clarity of the glass and the vivid colours used to produce the concentric millefiori, patterned millefiori canes and lamp-work features from which they were made. The company received high praise for its exhibits at many national and international expositions, which were the most important publicity platforms of the day. Cristallerie de Clichy’s high-water mark came at the 1851 Great Exhibition in London, at the famed Crystal Palace. In the wake of this success, the manufactory required the services  of some 300 employees to keep up with demand for its millefiori paperweights.

Somewhat counter-intuitively for paperweights, efforts were made to reduce the weight of the finished articles by making them from boracic glass instead of lead crystal. Clichy paperweights also became recognised for the use of lace-like ‘backgrounds’ which (in common with similar styles in art-glass and fine stemware) were known as examples of ‘latticino’ work.

They would also use intricately-entwined and twisted canes, double overlay construction for the glass bodies and – in particular - rose-shaped canes, which were to become the signature element of Clichy paperweights. These featured hollow cannulae of tinted glass, shaped and gathered around a millefiori centre, sometimes with the addition of green ‘sepals’ for added realism. These roses would be used to produce the classic Clichy rose bouquet paperweight, featuring brightly coloured canes including with pink and green, purple and white, red and white, white with blue or any number of other combinations, often assembled with white latticino, star canes and a garland of pink millefiori as an outer ring. 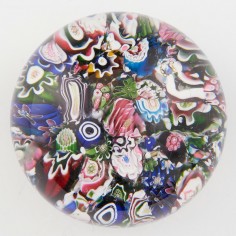