The Verrerie Royale de Saint Louis located at the on the easternmost extremities of France, near the Swiss and German borders, was founded in 1767, under the auspices of King Louis XV. Having initially produced mirror and window glass, in common with other contemporary manufactories in the area, the company began to concentrate on the creation of finer materials throughout the latter part of the 18th century, to a point in the 1820’s when they had perfected the art of high quality crystal glass. To reflect this new-found skill, the name was changed to Compagnie des Cristalleries de Saint Louis in 1829.

The production of Saint Louis paperweights purportedly began in the 1820’s, but there are only three different dates which are generally found on the 19th century examples that now find their way to market – 1845, 1848 and 1849.
The majority of St Louis pieces – unsurprisingly - featured the ‘house style’ which affected the appearance of a cushion-like background. It was on to these carpet grounds that the featured content – be it lampwork flowers, fruits or other decorative pieces – would be artfully displayed. These ‘cushions’ would often take the form of intricate interwoven canes, similar to the white latticino technique which was also used by Clichy. Another Saint Louis identifier is that millefiori or lampwork flowers would generally appear with a profusion of green leaves set alongside them.
I

n addition to their range of conventional pieces, the St Louis works produced distinctive egg-shaped paperweights, which were known as ‘hand-coolers’, and also made deliberate efforts to distinguish their outturn from the work of Clichy, in particular, by tending towards a paler, less strident colour-palette in the hope that this would set their pieces apart from those of their competitor (which were renowned for the intensity of their colours).
The initial period of paperweight production came to an end around 1867, and there was then a hiatus or some 75 years until the demands of collectors prompted a reintroduction of the craft in the early 1950’s. Pandering to the requirements of their new-found customer base, St Louis paperweights from this point onwards tended to be produced as strictly limited editions, ensuring the desirability of the pieces. 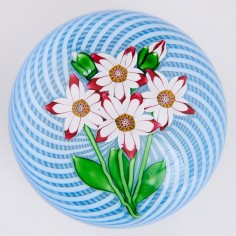 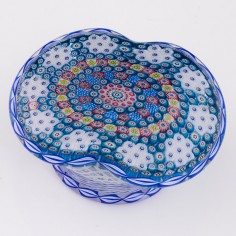 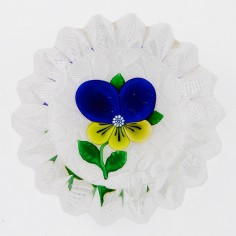 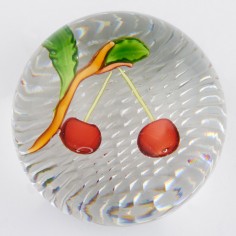 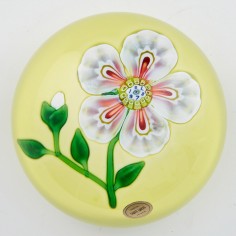 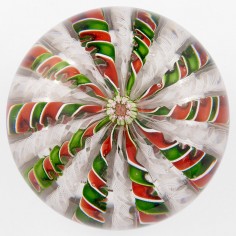