The question about which spirit measure should be used when dispesing spirits has been a dilemma for centuries. Over the hundreds of years since it became a Scottish staple, whisky has proved to have many and varied uses – from the purely medicinal aspect of warding off the chill of scuddrie mochiness to re-fortifying those in mourning, to strengthening the resolve of those in battle or required to work outside in foul conditions. The multifaceted liquor has had a role to play in every aspect of life in Scotland and has become intrinsically linked with the country and its people as a result.

First recorded in the latter part of the 15th century as a product of Lindores Abbey in Fife the distillation of malts and blends spread inexorably across the nation until it was so popular as to provoke the interest of the customs and revenue officers of the day who imposed a tax on its production in the mid 17th century – a perennial sign of popularity is when the government take their slice of the profits ! As is always the case with such interventions, production immediately went underground, quite literally in the caves of the western highlands and 100 years or so later there were just eight legitimate distilleries registered, with a further four hundred facilities reported beyond the reach of revenue officers.

In1823 Parliament drew a veil over futile attempts to regulate production and began to ease the tax burden on regulated distilleries whilst clamping down with increasing fervour on those operating outside of the law. With legitimacy and entrepreneurial opportunity came increased investment, research and development and within a decade the column distillation process had been refined and introduced. The resultant was a higher quality and less costly liquor which proved to be far more palatable than the rougher, caustic efforts produced by clandestine operations.

Politics was also to impact on the growing popularity of whisky, as that long-time ally of the Scots, the French Empire, called upon Scotland’s shipwrights to prepare for a mooted seaborne invasion of Germany during the Franco-Prussian war. The shipyards of the Clyde worked at a furious rate to produce the requisite warmongering craft and their employees and associated supply industries reaped the rewards of increased productivity. There was a sudden surfeit of disposable income amongst the crafters and grafters of the nation, and this mini economic boom drove a significant increase in the consumption of whisky.

A second huge boost to whisky consumption also came from France. In 1880 a virulent outbreak of phylloxera swept through vineyards and decimated production of cognac and brandy as a consequence. Astute Scots embraced the opportunity for whisky to fill the void and set about promoting their now highly marketable commodity in England and the near continent, with a new customer base this further entrenched whisky as a significant national resource.

With popularity increasing there comes an associated wont for regulation and a requirement for uniformity and the units in which whisky was measured, both wholesale and retail. At the industrial end of the scale, from cask to barrel, the measurements largely mirrored those of wine and brandy. At the pleasurable end of things whisky was to define its own specific dispensing measures, and “muckle gill”, “wee gill”, “two glass” and “four glass” were all to pass in to the lexicon of whisky purists, producers and connoisseurs alike.

Of more direct interest to those who seek to track down and enjoy antique glassware are the measures from which these “consumer units” were dispensed. It was generally accepted that glass vessels were far more reliable than those made of metal, as the latter would distort over time and short measures could be obfuscated whereas glass would either remain constant or break and thus be rendered useless. With a burgeoning whisky trade, glass manufactories therefore began to produce specific items for the storage and presentation of the spirit, with William Richardson (he of Wordsley and Stourbridge provenance) perhaps the most feted artist to do so, being responsible for some exquisite work of this nature having joined James Couper & Sons' Glasgow glassworks in around 1850. 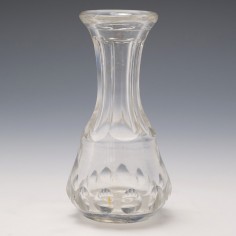 The hand engraved measuring mark V ( Crown) R was added after this left the manufactory.This denotes that it pre-dates the Weights and Measures Act of 1878. A simple piece of social history represented in a simple piece of antique glass.