Georgian ale glasses and those made through the ages have for the most part been a reflection of the British character, as befits something designed for use with what has amounted to the national drink for some 400 years or more. Fine continental wine glasses may be best suited to sophisticated, decorative glasses, but the bluff, uncomplicated virtues belonging to the staple drinking diet of the British working man demand predominantly plain, stolid and functional pieces ­ with the occasional nod to eccentricity and extravagance along the way, of course.

It should be noted that for the most part ales ­ and wine-quality ciders which were available alongside them in similar vessels ­ were far stronger than their modern equivalents and in order to make at least a cursory gesture towards limiting the amount of debilitating liquor that might be consumed during one sitting, the glasses were of a relatively small capacity befitting of strong ales. Known as dwarf or short ale glasses, they were made with only slight variations in form for over 150 years from the late 17th century, through the entire 18th century and beyond.

Ale glasses from the first half of the eighteenth century with hop and barley engravings to their bowls, folded feet and simple cushion or blade knops account for approximately 15% of all those which are still in existence. A similar proportion are fully wrythen-moulded ale glasses with folded feet. The most common variant is of a similar basic design but with the later conical foot. There is some variety in bowl shapes, the earlier forms are simple funnels with pointed, round funnels and bucket bowls becoming more common on later examples. Decoration to the bowls was very much du jour ­ for the most part, plain simple "flat" cuts and moulded fluting, and similarly what limited engraving there was in evidence followed similarly staid convention; wheat ears and hop cones for ale glasses, apples, pears and quinces for cider vessels and ­ occasionally ­ vines and grapes for wine glasses.

Ale glasses with air twist and opaque twist stems are often sold as ratafia glasses by mistake (or intent) by auction houses and some dealers. Genuine ratafia pieces have far straighter sides, closer to the vertical, when compared to ale glasses. Georgian drinking glasses and antique beer glasses do enhance the drinking experience even with modern beer styles and lend themselves well to Belgian ales, IPA, barley wine and imperial stout. 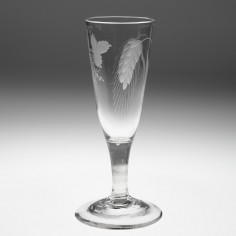 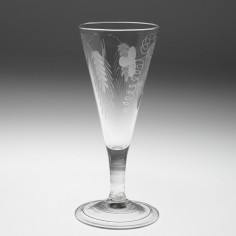 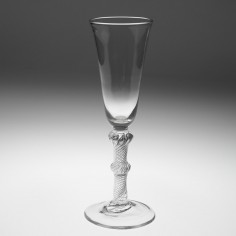 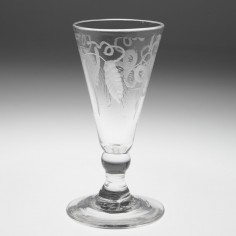 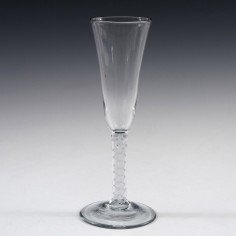 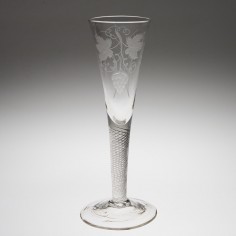 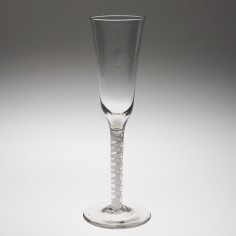 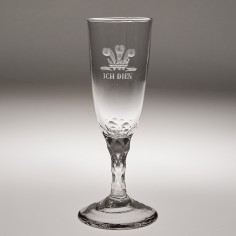 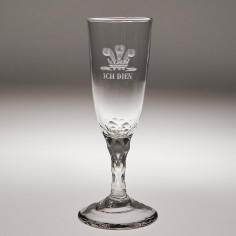 An Engraved Ich Dien Facet Cut Ale Glass c1762. This is not a jacobite wine glass 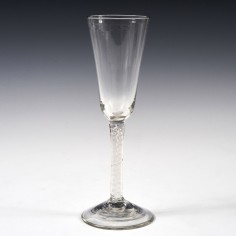 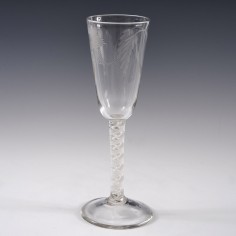 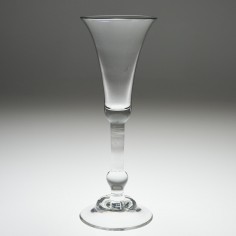