René Jules Lalique is unequivocally one of the most feted and instantly recognisable names within decorative arts and glass making dating from any era and must be regarded as one of the foremost exponents of the art; it’s not unreasonable to think of him as one who did more than any other to elevate the humble trade to a level where it could rightly be regarded as an art form in its own right.

From his earliest days as an apprentice Parisian jeweller, through the inception of his own business and ultimtely the mastery of his craft, rarely can there have been anyone so innovative who was immediately acknowledged as setting benchmarks against which all subsequent works should be judged; the greatness of many artists is not acknowledged until after their death, but Lalique was recognised as an extraordinary talent from the moment he arrived.

Having won plaudits for his design work when still at school in Paris, he commenced an apprenticeship at Louis Aucoc’s jewellery company on the completion of his formal education, albeit having some imperative to do so following the untimely death of his father. The newly-thriving Arts & Crafts movement in England enticed him to spend some time studying in South London, though details of this period are sketchy and the mooted spell at ‘Sydenham Art College’ seems to be perhaps apocryphal at best. It does seem likely, though, that his time spent absorbing the influences of Owen Jones, Richard Redgrave and the like had a profound influence on the approach he was to take with his own works, sowing the seeds of a naturalistic tendency which was to manifest itself in his work time and time again.

Back in Paris in 1882, Lalique spent four years as a freelance designer, working for some of the leading jewellers before establishing his own production facility, and making strides to distance himself from what he perceived to be a formulaic and predictable trade. Early departures by way of the use of little-used jewellers’ materials lead him to work with mother of pearl, polished horn, enamels and glass, drawing praise from none other than Emile Galle for his use of this material.

Intrigued by the opportunities that working with glass could offer, Lalique persevered with jewellry production as his stock-in-trade but also began to create ornate and extraordinary perfume bottles at Verrerie Combs-La-Ville; there are examples bearing the impression of shell whorls, replicating sea urchins, even evoking the cross-sections through ammonites and many more exquisite pieces; his appreciation of the natural world was beginning to become apparent. These bottles also saw the first examples of the delicate pastel colouration which would go on to characterize his work, along with the signature translucence and lubricious nature of the glass which would make it both look and feel so luxurious.

The contrasting and somewhat chitinous nature of some of his jewellry was then incorporated with glass to create sculpted chalices and goblets with pierced metallic exoskeletons, and he had now found another medium over which he had true mastery. Lalique’s first exhibition of glass-only products took place in December of 1912, vases made with the ‘lost wax’ moulding process which he was to go on and perfect in collaboration with the sculptor Maurice Bergelin. His designs began to exhibit a greater appreciation of the refractive qualities of the material, adding another dimension to the creativity as the pieces themselves would diffuse illumination to create depth, intensity and even an impression of movement. With the inception of functional, practical products such as lampshades being set alongside fanciful and purely artistic creations, an inexorable move towards Art Deco ideals and ideas became apparent in the company’s catalogues. Vases were to become his signature pieces – by way of some 450 different designs - Lalique embraced both the impressionistic side of Art Deco by creating works which suggested movement, gesture, ideas and form whilst also producing decorative ‘architectural glass’ on a near-industrial scale for less prosaic purposes.

He was soon sand-blasting huge glass panels for use in department stores, brass-coating and etching windows and screens for luxury liners and trains and enameling mould-made glass clock casements, but still exhibiting his innate artistic talent with every new venture – this adaptability being another near-genius trait in its own right. Ultimately, the Great Depression during the 1930’s and then the advent of war would enforce a scaling-down of production at the Lalique factories, a precursor to the death of the man himself in 1945. After six decades at the very pinnacle of his art, however, he had left a legacy of which is unlikely to be matched in extent, diversity, imagination or sheer quality – quite the achievement for an unassuming gentleman from Épernay. 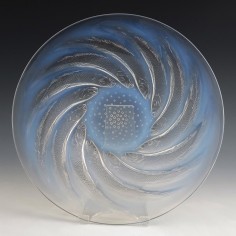 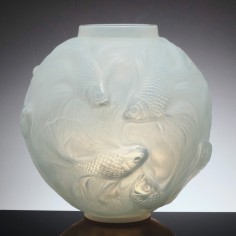 1924 was a year of great hope in France. The troops were finally withdrawing from Germany and both the Winter and Summer Olympics were held in France. This hopeful outlook is reflected in the spread of the art deco movement of which Lalique was at the for 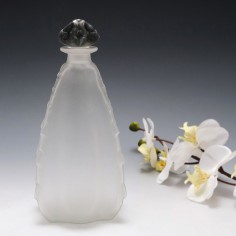 A Chypre perfume bottle designed by Lalique for Coty 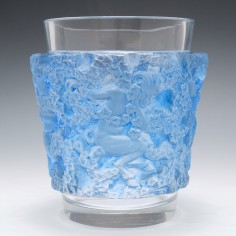 Bacchus, Dionysus in the greek panoply of Gods is accompanied by Pan and other Satyrs within a woodland setting with trailing ivy 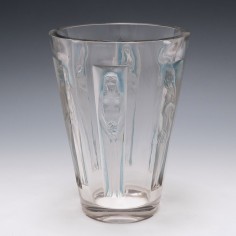 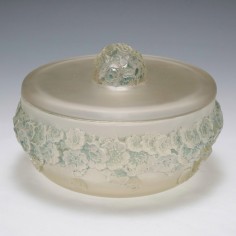 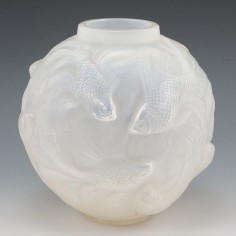 One of the most highly regarded of all Lalique designs. 1924 was a year of great hope in France. The troops were finally being withdrawn from Germany and both the Winter and Summer Olympics were held in France. This hopeful outlook is reflected in the exu 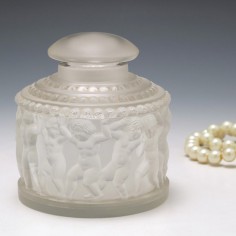 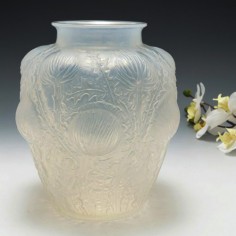 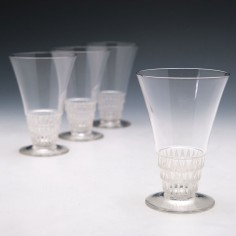 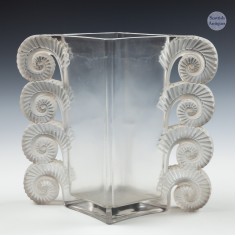 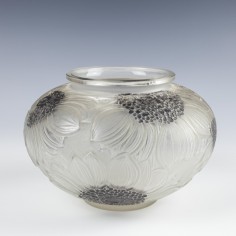