The most underrated and yet still highly functional Georgian glass. The outwardly simple expedient of making salt and other seasonings available for the use of your dinner guests – unsurprisingly - provided another unfettered dimension for the provision of a whole new variety of tableware.

During the 18th century, salt was still considered a not inconsiderable luxury, in spite of being readily available as a raw material in the UK. In the early 1700’s it was regarded as such a distinction to be able to serve salt that it was placed at the head of the table, near to the host, in relatively large vessels known as standing or master salts. From these it could be dispensed in to smaller, individual glass dishes or bowls. These were then placed close to the place settings for each diner and were consequently known as trencher salts, given their proximity to the trencher - or dining plate - of each guest.

Although salt could be well-refined to an acceptable level of purity, the one factor which could not be readily controlled was humidity, either that of the crystals in storage or of the room in which they were to be served. With no modern anti-caking agents available, there was no possibility of using an equivalent to the modern salt shaker, as the material would simple aggregate in to clumps at the slightest hint of moisture and resolutely refuse to pass through any small apertures. Georgian salt cellars were therefore simple open dishes, from which the crystals could be spooned or manually sprinkled on to the diner’s plate or - as was often the case - in to which food could be dipped.

The salts themselves (rarely referred to as salt cellars) followed the same pattern as did other tableware of the time – extravagantly cut pieces, albeit in miniature, with the decoration having the common purpose of refracting candlelight and adding to the spectacle of the fully-laden dining table. As the salts became smaller, the use of feet became increasingly redundant and – whereas master salts may have had quite weighty pedestals or bases to aid stability – the intention was that the smaller pieces just sat on flat bases, more so with “dipping salts” where the possibility of them being knocked over was perhaps more likely.

While salts constituted the smallest pieces to make up a range which was produced on any sort of scale worthy of classification, there was also a wide variety of increasingly more substantial pieces that also began to populate Georgian dining tables at this same time. The sheer variety of different condiments and comestibles which could be made available perhaps precluded these larger items from being designated for specific contents. Suffice to say that they would generally have been used as glass jars from which preserves, sugars, honey were served and glass jugs and sauce boats for dressings, butter, creams, gravies, stocks, sauces or syrups – sweet or savoury - could be dispensed to augment and enhance the constituent parts of a particular course. Being generally intended to hold either desiccated or at least partly-liquid material, these table jars often had lids to facilitate spill-free transportation from the kitchens, and to help to maintain a constant temperature for the contents, whilst occupying their place at table for the duration of the traditionally lengthy formal dinners.

Once again, decoration for these antique Georgian pieces mirrored current tastes and predilections, with many different types of cut facets, flutes, prisms and slices used to effect the by now obligatory refractive finish. Many cobalt blue glass and Bristol blue glass items were produced often adorned with silver mounts.

For collectors, the satisfaction of finding pieces of this nature can, of course, be made all the greater by securing one which has its original glass lid intact, although just because a pair may be a good fit and share a similarly executed design, these factors alone cannot guarantee that they’re an original pairing. Pontil marks on such vintage glass were polished out or masked with star cut designs

We will, of course, be glad to offer our opinion, completely without obligation, should you wish to furnish us with pictures of any items that you may be attempting to verify. 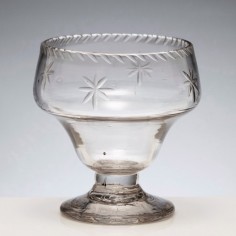 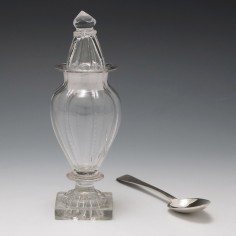 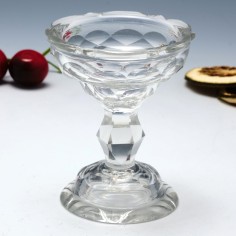 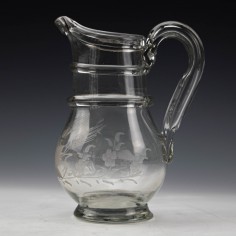 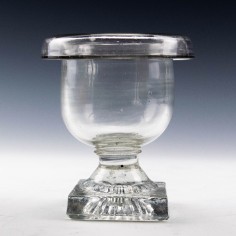 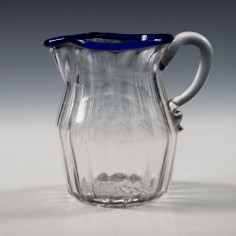