Selkirk Glass operated in the latter part of the 20th century, from their foundation in 1977 up to 2006, based in the Royal Burgh of Selkirk in the Southern Uplands of Scotland.

Founding partners Peter Holmes and Ron Hutchison headed up the company for twenty five years, and worked in conjunction with their other primary designers and makers James Brown, David McGregor, Ken Scott and Martin Coyle. Holmes had been apprenticed to Paul Ysart at Caithness Glass back in the 1960’s.

The bulk of the Selkirk Glass paperweights produced there tended to shy away from the conventional forms of millefiori canes and lampwork. Instead, the manufactory produced more abstract works based on astronomical, meteorological or naturalistic themes. Where millefiori were used, they tended to be for detail or punctuation rather than the bundled arrangements often seen elsewhere, or as ‘floating slices’ in suspension. These were particularly prevalent on the limited edition glass paperweights made specifically for the collectors' market.

Selkirk Glass was closed down two years after its acquisition by an investment company - who must wince when they see the current prices of some of the more collectible pieces ! 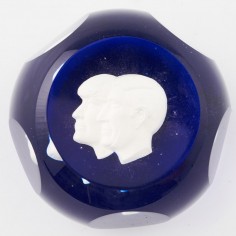 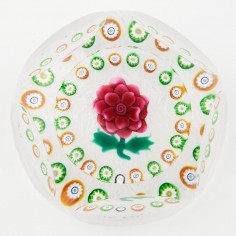 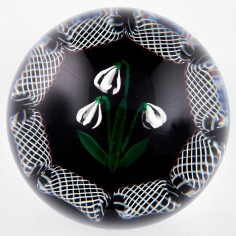