Rather counter-intuitively, the instigation of Nailsea glass production took place at a time where the excise duties on glass production were at particularly punitive levels – especially on items made from good quality flint glass. It was a gentleman by the name of John Robert Lucas who took the plunge in 1788. While this may not have initially seemed great from a business perspective, it did ensure that the factory made a name for itself which persists to this day on the back of the wide range of initially non-commercial products which were made from the freely-available, less exorbitantly priced crown (window) and bottle glass, which were the manufactory’s stock-in trade.

Founded in 1788 to cater for a spiralling demand for these commodity glass types, the factory initially grew up a little way away from the existing inhabited area of the village of Nailsea, and was somewhat self-contained, a fact reinforced by the influx of French nationals who moved to the area to work there. The site had its own public house and butchery to keep its workers fettled with essentials and they soon began to fabricate their own domestic wares from glass, as this was more expedient than venturing to ‘foreign parts’ outside of their own enclave to source such items.

It's often stated that these products were produced ‘at the end of the working day’ but this isn’t strictly true, as the ‘working day’ at Nailsea ran on a constant fourteen to sixteen hour cycle, as new batches of glass became available for processing rather than on any sort of ‘nine to five’ basis. This is another reason that workers lived adjacent to the works, so they were on hand at whatever time of day or night they might be required. It was cheaper to keep this cycle going constantly than to re-light the furnaces every day in order to keep to a fixed working schedule. So – opportune moments during a curious shift-pattern, yes, but not exclusively ‘end of day’ wares.

It can be imagined that once you’d fitted out your own home with the requisite bits and bobs, you weren’t immediately going to need another set of the same pieces in short order, so it quickly became a subsidiary source of income for the Nailsea workers to produce more of the same items for sale to the wider populace, and so the reputation of their wares began to spread.

However, there was no particular skill involved in the manufacturing process, and other glass-working communities up and down the country soon followed suit, making their own versions of the Nailsea pieces. The name, however, became generic for such items, and persists to this day whether referring to a Gloucestershire original, or later examples from Wrockwardine, Stourbridge, Alloa, Tyneside, Wearside or anywhere else for that matter.

Each centre of production did, however, tend to adopt its own broadly similar style of decoration, hence clear, green or cranberry pieces with combed or trailed white decorations are a good initial indication of possible Nailsea provenance, as is the discovery clear pieces with applied pale blue rims or amethyst trailing. This is not, however, an exact science and further verification by way of pattern-matching with other confirmed examples is advised before making a definite identification.

The list of items made is quite extraordinary – from the more ‘usual’ rolling pins and flasks, to hats, hookah-style pipes, musical instruments, lamps, walking sticks, bells and pairs of bellows. The majority of these were, of course, intended for predominantly ornamental use ! 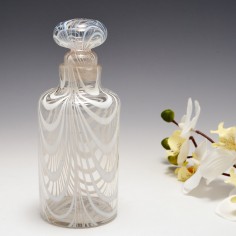 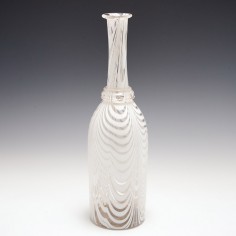 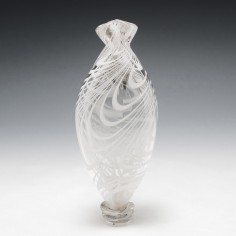 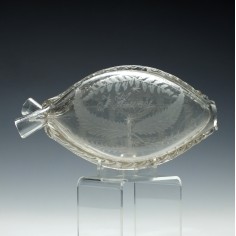