For the most part Victorian dessert-serving wares – custard cups. Jellies and sweetmeats - were a straightforward evolution of their Georgian forebears and, as such, have little to distinguish them other than the advent of some typically flamboyant decorative twists and turns in common with much of the other Victorian table glass categories we have identified.

Rather than simply repeat this narrative, then, it’s time to consider the content of the vessels – the actual nature of what was served up. We’ve already looked at sweetmeats and jellies – and older ‘custards’ – elsewhere, but what of the archetypal Victorian custards which so often filled these small ‘cups’ ?

For our guides through these somewhat uncertain, choppy and over-sweetened waters, we turn to Eliza Acton and Sarah Hale, writing in the snappily-entitled ‘Modern Cookery In All Its Branches: Reduced to a System of Easy Practice, for the Use of Private Families. In a Series of Receipts, which Have Been Strictly Tested, and are Given with the Most Minute Exactness’, published in 1845

First and foremost must be the ‘Royal Standard” of custards de jour – The Queen’s Custard. This seems fairly straightforward – a dozen fresh egg yolks, three ounces of sugar, a pinch of salt and a pint and a half pint of cream; mix, heat and stir until thickened to the point where it begins to boil, then remove smartly from the heat (very important !) You should then add ‘a wine glass and a half’ of either ‘noyeau, maraschino or cuirrasseau’ (so either almond, cherry or orange flavouring) and then sliced almonds ‘or not, at your pleasure’.

Now, depending on which source you choose to believe, Queen Victoria’s favourite drink was said to be either a mixture of claret and malt whisky, a French tonic wine called “Vin Mariani” (the tonic element of which was provided by 92.5 grains of cocaine per fluid ounce !) or hock, so none of the three alternative flavouring liqueurs as above. The name, is therefore, something of a mystery upon which neither Ms Action or Ms Hale have provided any illuminating comment…

If you should determine that your custard of choice be a bastion of sobriety, you may be better off trying Currant Custard. This omits any sort of alcohol but is instead based on a pint of ‘currant juice’, extracted from either white currants, strawberries, cherries or red or white raspberries and enriched with 10 ounces of sugar and just the half a pint of cream; sharpened up with a couple of tablespoons of lemon-juice.

The same basics suffice for both Apple and Quince custards (with an appropriately made juice to start with, of course, and skip the lemon juice for the latter) which brings us smartly on to Chocolate Custard, which sounds very much like the one which would tempt the modern-day palate the most from this brief selection…

‘Dissolve gently by the side of the fire and ounce and a half of the finest rasped chocolate in rather more than a wineglassful of water, and then boil it until it is perfectly smooth; mix with it a pint of milk well flavoured with lemon-peel or vanilla, ad two ounces of fine sugar, and when the whole boils, stir it to eight egg yolks. Put the custard in to a jar or jug, set it into a pan of boiling water, and stir it without ceasing until it is thick. Do not put it into glasses till nearly or quite cold’.

And there you have it, a compendium (albeit in parts) of comestibles which you can now make and serve to suitably impressed dinner guests using your Victorian custard cups, jellies, sweetmeats and other table glass sundries – with our compliments ! 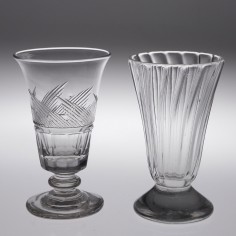 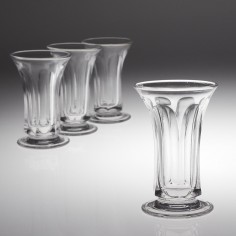