Jacobite glass, engraved wine glasses of the 18th century used to honour Bonnie Prince Charlie, The Young Pretender and his father James Francis Edward Stuart, The Old Pretender, are far and away the most avidly sought after and perhaps best known collectable of all Georgian wine glasses and Georgian drinking glasses. Their claim to the throne via King James II lead the Stuart Dynasty and supporters to rebellions and sedition. The Amen glasses being the most notable examples of the latter.

With the romance, intrigue and passion creating global demend the genre has sadly provided a fertile sphere of operations for forgers and copyists looking to part the unwary collector from his money, or simply to take advantage of an eager marketplace.

This illicit trade in Jacobite engraved glass was at its height towards the latter part of the 19th century, when authentic lead glass non-engraved hand blown twist stem and Georgian cut glasses all with pontil marks form the period were plentiful and just needed to be properly decorated to enable presentation as very saleable fakes. In other cases producers such as Benjamin Richardson and his not so Black Country cohorts produced such pieces for decades, although they were to be sold as reproductions rather than forgeries, but perhaps pre-eminent in the field of fakery with malice aforethought was the exiled Bohemian engraver Franz Tieze. Working out of a studio in Dublin from 1865 having set himself up as a “historicist” and at least in part pursuing a legitimate trade in reproduction works, Tieze ultimately became known as the source for many Jacobite and Williamite glasses which had been thought to be original, and sold as such. The man himself did not make a vast amount of money from his trade – it was those who commissioned his “copies” and subsequently sold them on as being genuine who made significant financial gain - but Tieze is still the man who’s name has become inextricably linked with the whole shady business..

That said, while caution much be the watchword for any aspiring collector in this field, such is its popularity that many very informative books are available which can give you every opportunity to avoid any misdirection by prospective sellers who may seek to defraud. We particularly endorse Geoffrey Seddon’s Jacobites And Their Drinking Glasses as the definitive work, with his research in to the provenance of the glasses so complete as to include the identification of the original engravers themselves. Central to a full appreciation of the genre is the ability to decode the messages and hidden meanings behind the engraved images, and for this you need look no further than Material Culture And Sedition, 1688-1760 by Professor Murray Pittock for all the knowledge you are likely to require and more.

For those who will be satisfied with a more cursory background that that provided by these sage tomes on jacobite wine glasses, allow us to outline the historical premise behind this particular range of glassware. The word Jacobite comes from Jacobus, the Latin version of the name James, and the original Jacobites were supporters of King James II, usurped from the throne of England by his daughter Mary and her husband William of Orange in 1688. Later – even after James’ death – it became a more general term for those who favoured the restoration of the Stuart dynasty. The main emblem of the Jacobites is a white rose, more properly alba maxima and quite distinct from alba semi-plana which is the White Rose of York. Although opinions do vary, it is widely interpreted that the rose signifies James Francis Edward Stuart (The Old Pretender) or perhaps, more simply, the throne of England. It is a common symbol on many Jacobite glasses, often in conjunction with two buds, representing James’ sons. An open bud - generally to the left - alludes to his direct heir, Prince Charles Edward Stuart (Bonny Price Charlie - The Young Pretender). A closed bud on the right represents Henry Benedict Stuart, Charles’ younger brother and known as Henry IX to adherents of the Jacobite cause. .

Other plants, insects and birds all appear on Jacobite glasses in abundance; bees signify undiminished loyalty to the royal lineage; moths, butterflies, dragonflies and beetles all pertain to fertility, rebirth and the perceived abundance of general wellbeing which would follow the hoped-for restoration of the crown; honeysuckle, carnations, pears, apples, vines are engraved, in addition to the rose, with increasingly oblique references in the most part to former head of the Stuart dynasty King Charles II; thistles signify the primacy of the Crown of Scotland in Jacobite fortunes.

Almost as innumerable as these naturalistic icons on glassware of this ilk are Latin words and phrases – a very low-level of encryption for phrases intimating loyalty to the cause. Fiat (let it come to pass), Redeat (it returns), Reviriscit (it flourishes), Audentior Ibo (I go more boldy) and others all adorn glasses from which toasts to the enterprise would have been taken. The rejoinder to theses toasts would have been “to the King over the water” (the exiled Jacobite pretenders to the throne) or, with far greater poesy and resonance – “to the little gentleman in the black velvet waistcoat”. This height of obfuscation actually refers to the simple mole, responsible for the mound of earth over which King William III’s horse stumbled at Hampton Court, throwing him to the ground, breaking his collarbone and leading directly to his death from pneumonia that took hold during his ensuing convalescence.

For William’s followers – as supporters of the incumbent king - there was far less need for communicating one’s allegiance by hidden cyphers, coded messages or obscure imagery, but no less a requirement for decorated drinking vessels. These somehow lack the romance and mystery of their Jacobite counterparts, though, and for the most part feature William mounted on a horse (the irony of this following his demise no doubt raised a wry smile or two on the Stuart side of the ongoing unpleasantness, and – also - notwithstanding the inaccuracy of the iconic imagery of his equestrian posturing at the Battle of the Boyne). Oranges and orange trees – for the House of Orange – were similarly popular and simple motifs, and there was a proliferation of commemorative banners and phrases eulogising about victory over James II’s army in Ireland, and of William surrounded by laurel leaves, timeless symbol of the victorious warrior. !

So, a significant imbalance in the complexity and range of imagery used by either side of the equation, but an intriguing and richly involving area to be explored, if one is confident enough of being able to successfully navigate the minefield prepared by Richardson, Tieze and associates – good luck!

Here's to the King over the water, and the little man in the velvet suit! 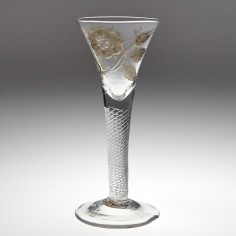