The Whitefriars company was to have a long and storied history in British glassmaking, from the point that James Powell purchased the premises from which he operated in 1834; they did not, however, produce paperweights until almost 100 years after this date, in spite of what you may be led to believe to the contrary

Powell participated in the Great Exhibition of 1851, exhibiting alongside the renowned French producers who displayed their own paperweights which immediately became inordinately popular. Other English manufactories – Bacchus, Islington and Richardson, for instance – all embarked upon paperweight production in an effort to claim their share of the market, but Powell & Sons did not immediately follow suit.

They did, however, assiduously replicate Venetian glassmaking skills, making much of the ‘Italian revival’ in the last quarter of the 19th century. This included the production of millefiori canes which were incorporated in to vases and jugs, but only on a very limited basis, and still they did not embark on paperweight production – at least, not on a commercial basis.

It is not until the 1920’s that there is any evidence of the company producing paperweights (and inkwells) featuring similar canes, but these seem to have been produced sporadically and appear very infrequently in sales catalogues. Any paperweight offered for sale as being of Whitefriars provenance, and dated prior to WWII should be treated with suspicion !

Post-war production is, however, a different proposition, and there are many very fine and fully accredited examples for sale, many of which we are pleased to offer for sale. The company utilised their Italian-style skills, and there are several paperweights featuring spiralling latticino tapes and bullicante-type bubble inclusions, alongside conventional millefiori canes, and far more complicated versions which were used to build up images (notably, one of an owl).

Whitefriars glassmaking heritage also stood them in good stead with regard to glass-cutting technology, and there are some exquisitely-facetted paperweights and others with broad ‘windows’ to accentuate the content of the globes.

Ultimately, though, just four years short of the 150th anniversary of Powell’s initial purchase, the company ceased trading – literally – in all but name, as the rights to use both that and the ‘hooded monk’ signature canes were acquired by Caithness Glass, who proceeded to produce many thusly-identified paperweights under licence for the next twenty five years. 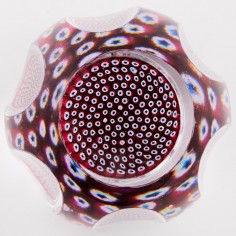 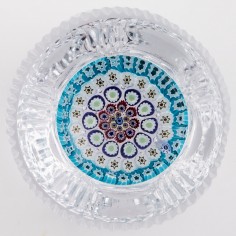 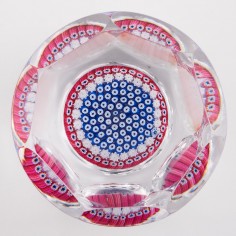 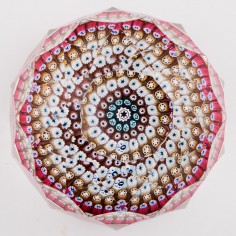 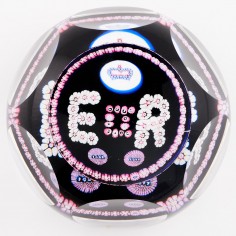 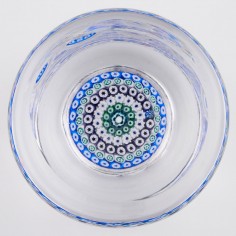 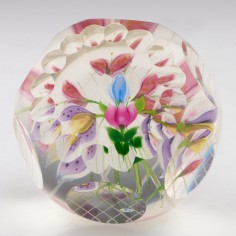 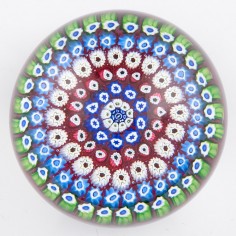 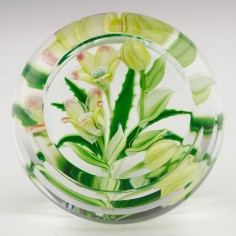 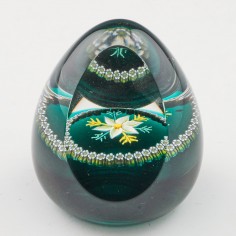 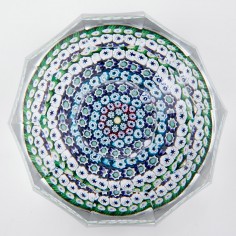 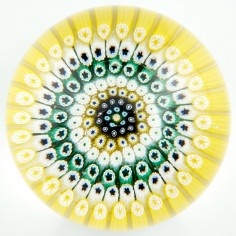 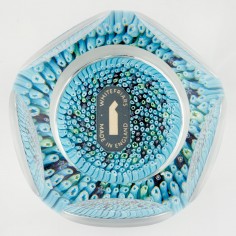 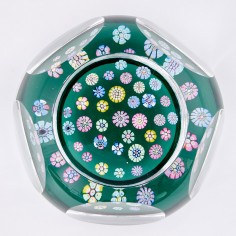 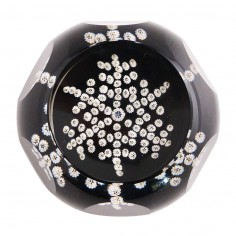