The vast majority of antique glass tankards which have passed through our hands have been embellished in one way or another; engraving, gilding, coloured rims, the application of tinted lenses, extravagant cutting or acid etching and combinations of one or more . Whole-coloured examples are perhaps the most likely not to feature other decorative techniques, as the more accomplished use of coloured glass would prove to be an appealing feature in its own right, whether through the use of delicate, pastel tints or dazzlingly bright blues and the very popular magenta/cerise cranberry glass. These colours might be enhanced by the use of flashing or cut-to-clear techniques to create striking contrasts with clear crystal elements.

Towards the end of the 19th century, more strident colour combinations than ever seen before began to appear in antique English glass; swirling enamelled patterns in green and white, multi-coloured spatter glass or crackle-glass designs, perhaps highlighted with glistening aventurine accents. Perhaps the most striking of Victorian colourways was the advent of uranium glass, the neon-green or yellow material which fascinated a populace who slavishly embraced anything which complemented scientific advancement.

There was still room for more traditional techniques, and 19th century hand blown tankards perhaps proved to be the most popular medium on which glass engravers could display their talents since the halcyon days of Jacobite glassware in the previous century. Engraved masonic tumblers seemed to be commonplace, along with armorial pieces, scaled-down versions of commemorative designs which also appeared on rummers, and even tumblers bearing engraved chinoiserie designs, something far more commonly seen on porcelain.

Where there was no imagery or colouration applied to cut glass or clear crystal tankards or tumblers, the glassmaker’s more mechanical skills would come to the fore; there are wrythened examples, some with exquisitely cut and facetted finishes, examples bearing prunts or coiled feet to replicate early roemers, plaited handles and hammered finishes – every chapter of the glass-craftsman’s handbook seems to have been fully explored 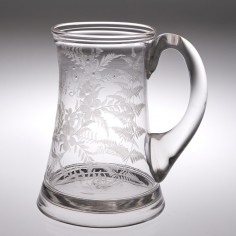