The production of Victorian decanters and pitchers, flasks and jugs, carafes and ewers seem to have been an area where Victorian glassmakers were able to cast off the shackles of convention and produce some beautiful pieces using all the different techniques which they had at their disposal.

If clear crystal pieces were not extravagantly engraved, trailed or facetted then late 19th century examples were cut and polished to the maximum extent. The exemplar is in the form of ‘porcupine decanters’ with their myriad diamond cuts and angular prisms. If clear glass was considered altogether too old hat, then any number of chromatic fashions could be followed, from the blues and greens of Bristol colouration in the earlier part of the 19th century, through the inevitable uranium glass pieces and ultimately ruby glass, perhaps the quintessential Victorian colourway. All or any of these tints can be found in conjunction with different production techniques – cased and cut to clear examples, gilt finishing (which is particularly striking in conjunction with amethyst glass), cameo and other opaque or translucent finishes or whole-coloured decanter bodies fitted with clear handles and stoppers – you can take your pick from any number of combinations.

For pure ostentation, the latter part of the century takes some beating, with the influx of Bohemian decanters to the fore – bold designs, colour combinations which bordered on gaudiness and finishing which was joy to behold on such large vessels. Then there are the Art Nouveau decanters, particularly those from France, where pewter or silver - and green glass - pieces couldn’t be a more perfect embodiment of the rise of absinthe in its role as the nation’s intoxicant of choice, although such examples were also intended for use with red wine, and not exclusively for ‘la fée verte’.

On this side of the channel there had been an earlier preference for marrying metal fitments with cobalt blue glass, and for producing silver stands which would hold two or more decanters made of this same luxuriant material; these pieces – as with the use amethyst and gold – featured a near perfect combination of complementary colours, and thus make for some really very striking sets indeed.

So, although the scope for collecting Victorian decanters and other similar vessels is very wide ranging, it also includes some far from common examples of 19th century craftsmanship at its finest, both in execution and design. And, of course, the fruits of your labours should you choose to collect such objects of desire can very easily be put to excellent use 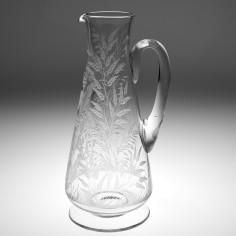