Georgian glass, bowls, covered jars and wine rinsers and more are the result of social, political and economic issues and the burgeoning use of new types of glassware in the late 18th and early 19th centuries. The Regency saw a blurring of the distinction between sophistication and ostentation which was exhibited at dinner parties. It seemed to be not just a case of displaying your wealth by utilising finely-made pieces, but of ensuring that as many different items could be brought to table as possible – a fusion of both quality and quantity being the desired effect !

Of course, this propensity ran alongside the existing insistence that variety was, indeed, the spice of life and it was standard practise to serve several different types of wine during the course of one meal – aperitifs, an appropriate wine to accompany the main course, dessert wines, a digestif and further post-prandial liqueurs. While it might be reasonable nowadays to expect that an entirely separate glass would be used for each, in the 18th century a degree of economy was applied, and rather than new glasses being presented for use with each wine, the facility to wash your glass between courses was made available instead, to ensure that residue from one variety did not taint the next to be served. A wine glass was a costly item and rinsers remained in use with the middle classes until the mid Victorian. Dining during the Regency became extravagant, with as many at forty dishes on a menu, served over five or six courses and all the dishes were bought to the table. Despite his huge credit line the Regent himself only provided three glasses per person, and they had to be rinsed to consume as many as twelve different wines, port, madeira being extremely popular, negus, ratafia and champagnes as one could manage.

Georgian wine rinsers - items placed within easy reach of diners and filled with cold water or water and ice such that glasses could be given a cleansing bath. These pieces may also be referred to as coolers, though the purpose and practicality of their use for actually cooling glasses are moot points. Suffice to say that whatever the function, Georgian dining tables were not considered complete without these generally bucket-shaped receptacles, with lips to their rims to accommodate the stem of an inverted glass. The decorative preference for these pieces was for them to be cut with flutes, slices or other facets designed to increase their refractive qualities and enhance the splendour of the set table. For 18th centurt glass candy dishes please see sweetmeats.

Pontil marks were predominantly polished on late 18th and early 19th century antique Georgian table glass. Ths applied to almost all antique glass bowls such as wine glass rinsers and antique glass fingers bowls as they woud be in direct contact with the flame mahogany dining table and the surface needed to be preserved from scrartches. Footed bowls will predominantly have polished pontil marks or moulded lemon squeezer feet. Some may have star cut bases. Those examples with grids of strawberry cut diamonds on the underside of the foot are almost exclusively 20th century copies. Would you put this on a polished mahogany dining table ?

Cutting was also used to enhance a variety of other items made to contain all manner of other accoutrements deemed vital to the newly-cosmopolitan dining experience – sugar, butter, cream, pickles and sauces – and that’s without venturing into the sphere of salt, cubeb ( pepper), ginger, galangal, mace and seasoning receptacles, which provided a whole range of dedicated items from which to serve them alone.

Having indulged in any number of the delightful comestibles set out for one’s enjoyment, there was the small matter of personal hygiene to be observed, and to this end the period also saw the advent of finger bowls, again judiciously placed within reach of each diner. As any Jane Austen fan will know fingers were still used to eat meat and fish. Finger bowls were often made from coloured glass, georgian cobalt blue glass, Bristol greenand blue and amethyst glass for decorative effect. 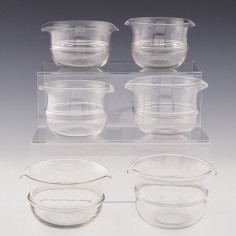 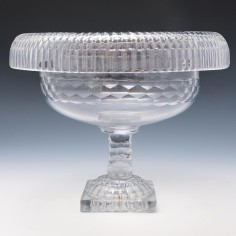 A Fine Irish pedestal bowl with hand blown bowl and pressed glass lemon squeezer pedestal. The turned rim bowl carries many imperfections of the glassmaker's crucible but this is in stark contrast to the mastery of the 18th century glass cutter. A perfec