Other Table Wares and Miscellany

The scope of Georgian table glass which was available grew broader as dining tastes grew more and more eclectic towards the end of the 18th century. Diligent and genial hosts would readily embrace influences and ideas from across the globe as Britain’s sphere of endeavours grew ever wider, vying with friends and acquaintances in an attempt to present the most extensive – and therefore most sophisticated – range of dining accoutrements. Never has the phrase “less is more” been less appropriate.

As the desire for more esoteric and unusual items grew, pieces entered common usage which cannot be readily placed in to any of the other existing categories which we have already explored. As a collective, though, these oddities and curiosities constitute their own class of tableware – the diverse items which filled every last conceivable niche in the hodgepodge of Georgian dining miscellany.

Consider the use of cream, for instance. There was a myriad of existing pieces already in use as jelly glasses or custard cups, salts, rummers or sweetmeats which would have quite adequately served to present cream at table, but none of these evoked the original wooden pails in which the cream would have been collected when initially prepared at the dairy. Hence we have piggins, taking their name from those same wooden tubs, but replicated in glass, and affecting the appearance of the original items by having a “handle” as an extension of an element of one - or occasionally two - of the sides. These would generally be quite small pieces, but made from thick glass – lavishly cut and faceted – in order that they could be chilled and then filled to keep the cream fresh for as long as possible.

Having mentioned jelly glasses, it should be noted that these were not exclusively used for serving jellies of the sweet variety. With the British pallet enthusiastically taking on board the French penchant for savoury entrees we find the likes of pâtés, spreads, terrines and pressed and potted meats all vying for a place on the dining table. It would simply not have been seemly to have served your calves foot, bone marrow or aspic-encased viscera in the same vessels as were used for their delightful fruited equivalents, and so we find patty pans intended specifically to accommodate these more piquant preserves. Again they were relatively small – about the size of modern ramekins – and almost universally in the form of abbreviated conical bowls with flat bases and a folded or moulded rim. Decoration was at a premium – simple fluted or slice-cut facets would generally suffice – but many examples were left entirely plain.

As ever, ostentation was to the fore, and the properly prepared Georgian dining table demanded a suitably stunning centrepiece. To this end we find tazzas – broad, flat dishes on baluster or pedestal stems on to which jellies, custards, sweetmeats – pretty much anything to be fair - would have been arranged. The variety of stem used for tazzas, and the combination of plain or engraved, lipped or plain-edged display surfaces make for a wide variety of designs which constitute  an eminently collectable genre in their own right. If you do decide to go after tazzas, do try and secure a set or two of matching pieces of diminishing size that were designed to be stacked to make up a particularly extravagant display – five complementary tiers is the most of which we are currently aware, so please let us know if you find anything over and above that !

In to our general category of Georgian table glass, we can also add candlesticks, pepper sifters, condiment bottles, cruet sets, cutlery rests, serving dishes and salvers – so you really do have a pretty broad remit if you wish to ‘specialise’ in collecting this sort of material. 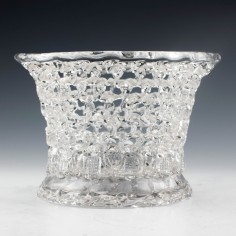